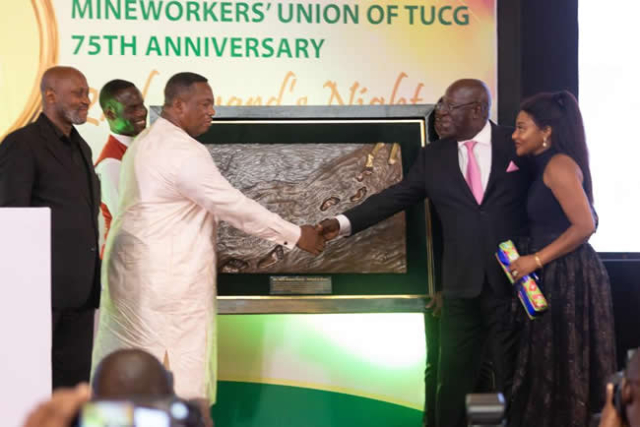 The Ghana Mineworkers Union, as part of its 75th Anniversary, has awarded Sir Samuel Esson Jonah, the Former Chief Executive Officer of AngloGold Ashanti Limited for his contribution to the development of the mining industry.

“Your strong sense of equality, your exhibition of excellent emotional intelligence and maturity led to the removal of racial barriers in the mines during your tenure as Chief Executive”, he said

Sir Jonah initiated and supervised the construction of workers’ accommodation for both junior and senior staff, thus meeting the housing needs of the average mineworker in the then Ashanti Goldfields Corporation.

They were presented with a plaque for playing a sterling role in shaping the mining sector.

For Prof Sawyerr, the General Secretary said he offered the needed leadership to advise government on all issues relating to the exploration of the country’s mineral resources in the 1980s.

“Your able leadership of the board led to the successful integration of the separate commissions for aluminium, steel and gold into a single commission, formulation of an export strategy and the collation of geological and economic data on mineral occurrences and deposits in Ghana to promote the development of new mines”, he said.

On Mr Poku, Mr Ankrah said his effective leadership role created the foundation that helped build the reputation of the Chamber in advocating policies that were beneficial to the economy and the mining sector.

“You ensured peace and stability on the mines by forging cordial relations between the mining companies and the Ghana Mineworkers’ Union. This you did by establishing committees within the chamber to find solutions to industrial and employment issues”.

For Mr Ansah, the General Secretary said he ensured the successful formulation of mineral policy and legislation to create an effective regulatory framework for the mining industry.

“You also negotiated successfully and secured multilateral institutional assistance specifically the World Bank and United Nations to the mining sector in Ghana”.

Mr Jonah on behalf of the awardees thanked the Union for the honour and called for unity to develop the sector.

Professor Patrick  Agbesinyale, the Chief  Director, Ministry of Lands and Natural Resources said government was appreciative of the conducive environment created by the harmony among the stakeholders and would work with the Union, to sustain the peaceful atmosphere.

He said government took note of their recent concerns with respect to employee-employer relationships and promised to undertake constructive engagement with labour to ensure effective understanding between the parties.

“We are pursuing accelerated investment in human resource development to boost our chances as sustaining our position as the leading gold mining destination in Africa”, he said.