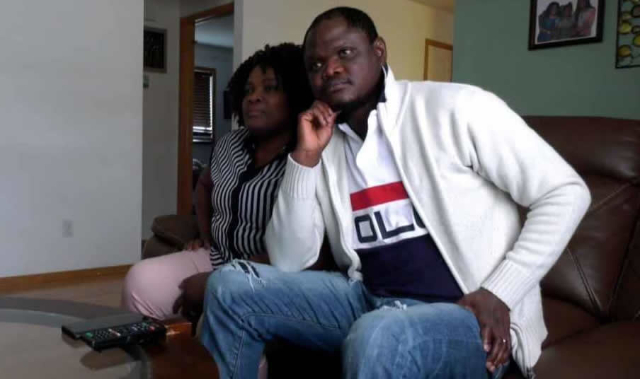 A Nigerian husband and his Canadian wife of Ghanaian origin are fighting a deportation order scheduled for next week.

Temitope Issac Kayode came to Canada several years ago as a refugee from Nigeria, and married a Canadian woman, Doris Addo, last July.

He applied for permanent residency in October 2018.

Tuesday, they thought they were going for an interview about the application with immigration officials, but Kayode says that instead of an interview, he was handcuffed and taken into custody.

“It was a big embarrassment, a disgrace,” said Kayode, who isn’t exactly sure why he was detained.

Following a hearing Thursday, he was allowed to go home with his family, but issued a deportation order from Canada Border Serves Agency which states he must appear at the Calgary International Airport Tuesday, October 22 at 12 p.m.

“It’s going to be very difficult on us,” Addo told CTV News.

She has two adult children with cerebral palsy who require caregivers. The family is concerned about not having enough help without Kayode.

“it’s going to be a lot of work on me and my daughter, my middle one. I’m going to need her support extra but that won’t be easy because she is in school,” said Addo.

The couples’ immigration consultant is fighting the deportation.

“It’s not often the case that you have a situation such as this family, where there are other prevailing circumstances that the law demands we take into consideration,” said Kennedy Thompson.

CTV News has reached out to the Canada Border Services Agency and Immigration, Refugees and Citizenship Canada for comment.

Both have said they will respond next week.