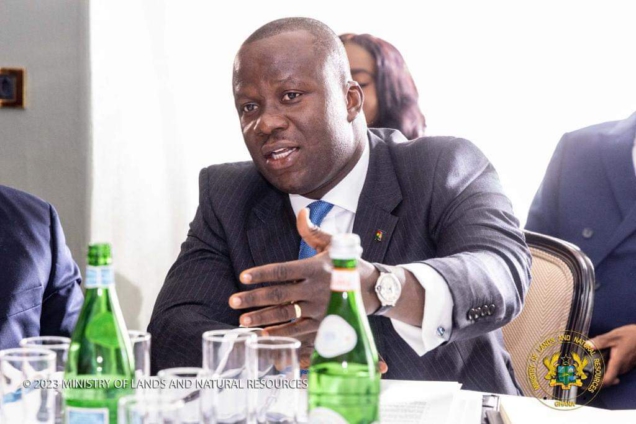 The Minister for Lands and Natural Resources, Samuel Abu Jinapor, says forest and nature-based solutions have proven to be very impactful and verifiable, and Ghana, as a respected member of the international community, remains committed to working with all partners to deliver forest and nature-based climate solutions to achieve the 1.5 degrees Celsius target for people and planet.

The Minister made this commitment when he joined Secretary John Kerry of the UK, in the capacity as co-Chair of the Forest and Climate Leaders’ Partnership (FCLP) on Wednesday, 18th January, 2023, on the sidelines of the World Economic Forum, in Davos, Switzerland.

Together with Secretary John Kerry, the Lands Minister held two separate meetings with Brazil and the Democratic Republic of Congo (DRC), to find ways of working together to achieve the ambitious objective of the FCLP to halt and reverse forest loss and land degradation by 2030, whilst delivering sustainable development and promoting an inclusive rural transformation.

The Minister indicated that the meetings were very fruitful, adding that they are encouraged by the commitment of the IBC to work with the FCLP to achieve its objectives.

He also noted that achieving this high ambition of the FCLP requires that the team works closely with some major forest countries.

Already, Indonesia, Brazil and DRC, the Minister said, have formed the Indonesia-Brazil-Congo (IBC) rainforest alliance, to protect their forests, adding that together, these three countries control over fifty percent (50%) of global tropical forests, and are crucial to global efforts at halting deforestation.

Mr. Jinapor made a clarion call for all efforts to be made to fight climate change, saying “the climate crisis is reaching a tipping point, and requires all hands-on-deck approach to come to grips with this crisis.”

DISCLAIMER: The Views, Comments, Opinions, Contributions and Statements made by Readers and Contributors on this platform do not necessarily represent the views or policy of Multimedia Group Limited.
Tags:
Lands and Natural Resources Ministry
Samuel Abu Jinapor