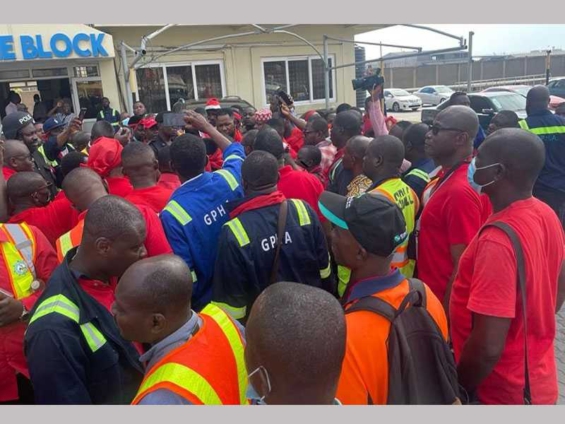 Workers of the Ghana Ports and Harbour Authority are protesting against the Meridian Port Service (MPS), GPHA concession agreement signed in 2015.

The workers who were clad in red attire contend that the refusal of MPS to seed 20% container business to GPHA had been having a dire impact on the work constituent.

JoyNews sources have indicated that officials of the Transport Ministry are already at the place trying to get the workers to get back to work while they deal with the matter.

This comes after the unions declared their intention to stage a protest.

The Maritime Dockworkers Union (MDU) had earlier petitioned the presidency on the matter, which necessitated a cabinet meeting on the issues and concerns raised by the unions, according to the Union Chairman, Mr Emmanuel Arhin Young.

However, a fallout of the cabinet meeting directed the sector minister, Kwaku Ofori Asiamah to engage with both parties (MPS-GPHA) to ensure that the demands of GPHA are adhered to by MPS which include; GRA compliance with all refrigerated containerised cargo volumes from MPS to GPHA Reefer Terminal, GPHA to implement its intention of leasing Harbour Mobile Cranes for its containerised vessel operations, and GPHA be allowed to handle 20% of containerised cargo traffic during the ten-year exclusivity period.

Mr Arhin in an interview with the Finder Newspaper disclosed that these directives have been duly communicated to MPS with several reminders as MPS has failed to adhere to the directive of Cabinet, especially on the 20% container volumes since 2019.

The non-adherence of MPS due to the inaction of Ofori Asiamah, on the directives, necessitated the local unions to engage both the management of GPHA and the Minister on the MPS-GPHA issues which sound frustrating and hopeless, he added.

He said the local unions viewed this as an act of gross disrespect by MPS to cabinet, and by extension the President, for disregarding his cabinet-led directive over the period.

This, he stressed, was unacceptable because of its daring consequences, currently impacting negatively on the entire workforce and financial sustenance of the organisation in general, with workers of GHPA’s conditions of service getting worse with the current economic situation of the country.

DISCLAIMER: The Views, Comments, Opinions, Contributions and Statements made by Readers and Contributors on this platform do not necessarily represent the views or policy of Multimedia Group Limited.
Tags:
Ghana Ports and Harbours Authority (GPHA)
Industrial strike