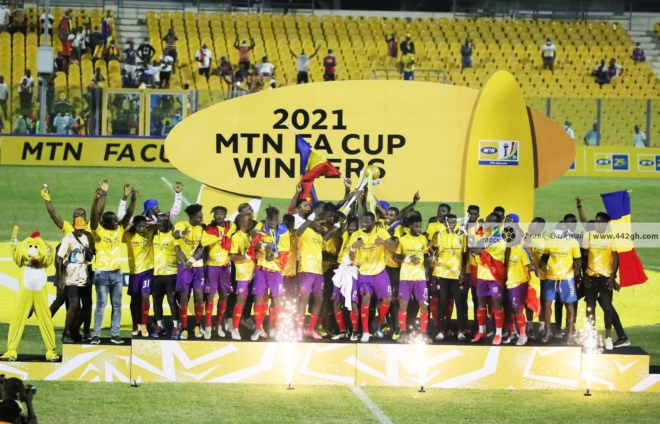 Hearts of Oak Board member Dr Nyaho-Nyaho Tamakloe has launched a scathing attack on the Ghana Football Association (GFA) for awarding low quality medals to the Phobians after winning the Ghana Premier League and FA cup last season.

Pictures of medals awarded to players and technical members of Hearts of Oak, was met with serious criticism by football fans on social media, with many insisting the GFA could have done a better job of appreciating the work put in by Accra-based club all season.

“We as a club have not at all had any complain or said anything but as a leadership, the FA has been there for years – over 60 years now, and there have been progress all along. They are there now and they see the best being done, and I don’t think there’s the need for anyone to put pressure on them to better their position and the positions of the club, because this sort of third-class cups is unacceptable now. Look at the sort of medals the boys had – it’s unacceptable

“So I believe strongly their own leadership should look into it and know that the word is changing. Everybody is now well informed and television is everywhere in the world. People are watching, particularly what happens in Ghana here, as we are a football country and they should improve these things. They have the money there, so I don’t see what their problem is. These sort of third-class cups and batches that they gave to the boys, I think it’s time they put a stop to it and get us something up to world standards,” Dr. Tamakloe exclusively told to Joy Sports.

Hearts of Oak wrapped up the Ghana Premier League title in dominant fashion, beating historic arc-rivals, Asante Kotoko in the Super Clash, which ultimately shut the door of title dreams, in the faces of the Porcupines.

Dr. Tamakloe explained though the double-winning season started with a worrying beginning, the hard working team worked hard for a massive turn around.
.
“It’s been very hard work. We started the league with a lot of problems but we were quite sure that if we work harder, definitely we will take something. As a board, we got our loins under the wheel and then decided ‘let’s push things’. There were a few things we did because at the beginning of the whole program, our technical team totally collapsed, and that is a disaster and if we had not had the experience in handling such issues, the club will have been in a very bad situation. So we quickly got ourselves together. We made sure we got a new manager, a new coach and other technical assistance like goalkeeper trainer and a host of all other positions for the technical side.

“We made sure the boys did not lose courage at all, which surprised us because they were strongly behind us. We started forging ahead and as the game went on we started winning our matches to our surprise. But we realized the boys are working very hard. At times they train twice in a day. I must say there are a few stop-gap coaches who have helped us a lot – one is our stop gap for the auras, whose name always escapes me. And then we have Nii Owusu who did very well too, indeed during his time we were able to win like two matches until our new chap, Samuel Boadu came in.

“So it’s been a strong struggle but we have been so persistent and I am not surprised by where we at,” Dr. Tamakloe revealed to Joy Sports.

The culmination of hard work and persistence has left the club in a position they will believe is rightfully theirs. After a six-year absence, Hearts of Oak will travel away to Guinea in the first leg of their Champions League encounter with Industriel de Kamsar.

The Phobians are scheduled to host the second leg of the encounter here in Ghana.

Enjoy the full video interview below: