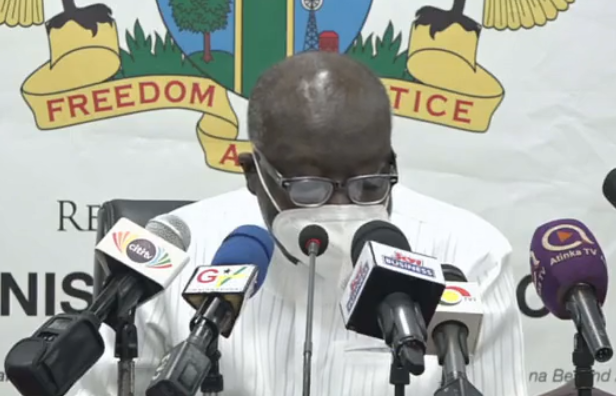 Finance Minister, Ken Ofori-Atta has disclosed that Ghana has been taken off the Financial Action Task Force’s (FATF) greylist on money laundering and terrorist financing.

Mr Ofori-Atta made this known at a press briefing on Wednesday, June 30.

According to the Finance Minister, at a plenary meeting held on June 23, Financial Action Task Force in a unanimous decision agreed that Ghana has satisfactorily completed its action plan, thus its removal.

“By this decision, FATF, and for that matter, the international community has renewed its confidence in Ghana’s anti-laundering encountering the financing of terrorism regime,” he said.

This is after the International Cooperation Review Group, one of the technical groups of the FATF charged with the responsibility of identifying, reviewing and monitoring jurisdictions with deficiencies that present a risk to the international financial system, had submitted their report.

The Finance Minister revealed that this is an achievement that will encourage investors to establish business operations in the country.

“This is a great relief for the country considering the economic consequences suffered by countries that are greylisted. This will boost the confidence the integrity of our financial environment and also boost foreign direct investment,” he stated.

In 2016, Ghana was subjected to a second round of mutual evaluation by the intergovernmental action group against money laundering and terrorist financing in West Africa, GIABA.

Ghana was the first among her peers in the West African sub-region to have gone through the second round of mutual evaluation.

Even though this round of mutual evaluation showed some progress over an earlier one in 2009, there were still significant gaps that needed to be addressed.

Ghana was, therefore, placed under observation by the International Cooperation Review Group and a two-year action plan spanning 2019 to 2021 was developed to address the deficiency.

Following FATF acknowledgement, the European Union also issued a press release on October 18, 2020, adding Ghana to their list of high risked countries with strategic efficiencies in their anti-money laundering encountering the financing of terrorism regime as a result of Ghana being on the FATF list.

Meanwhile, Ghana could possibly be removed from the European Unions’ list of countries with deficiencies in anti-money laundering laws after August this year.

According to an email from the EU responding to enquires by Joy Business, the “grouping” noted that there are still some processes that need to be completed before Ghana can be taken off its list, adding, “now that Financial Action Task Force (FATF) has removed Ghana from its list, there are no more requirements from the EU side.”

DISCLAIMER: The Views, Comments, Opinions, Contributions and Statements made by Readers and Contributors on this platform do not necessarily represent the views or policy of Multimedia Group Limited.
Tags:
Finance Minister
Financial Action Task Force
Ken Ofori-Atta
Money Laundering