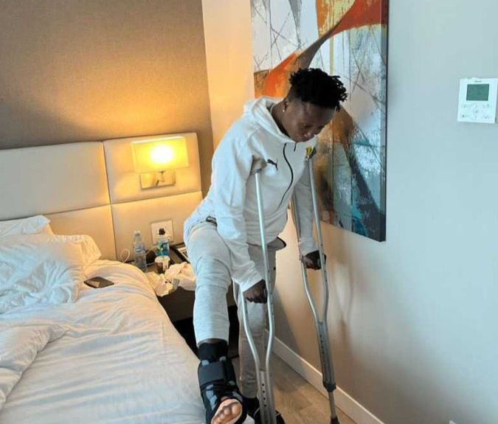 Ghanaians woke up to the news that footballer, Evelyn Badu could miss out on the U-20 Women’s World Cup opener against the USA.

The Black Princess’ captain is reportedly down with an ankle injury and is taking steps towards recovery.

The current CAF Women’s Inter-Club and Young Player of the Year 2022 was expected to be a dynamic in the team’s squad to boost their fortunes, as the side have failed to qualify from the group stage in the last five attempts.

This morning, the Ghana Football Associated (GFA) posted photographs of Evelyn’s current state as many social media users described it as a big blow.

Despite the injury to a star player, morale remains high in the team’s camp, per sources.

Below are more posts from social media users on the development regarding the Avaldsness’ midfielder.

Black Princesses captain @EvelynBadu15 sustains ankle injury on the eve of the Ghana opener vs USA.

Official team information says the situation could rule her out of the tournament. #JoySports #WWC2022 pic.twitter.com/TMZSnjmCu2

Black Princesses captain, Evelyn Badu suffered a fresh injury during training and will not feature in today’s game against USA.

Its sad Evelyn Badu might miss the World Cup tournament in Costa Rica but I still have hope in the black Princesses pic.twitter.com/cTVjyvHrHz