Ghana’s economy is suffering from an unfortunate condition – Ato Forson 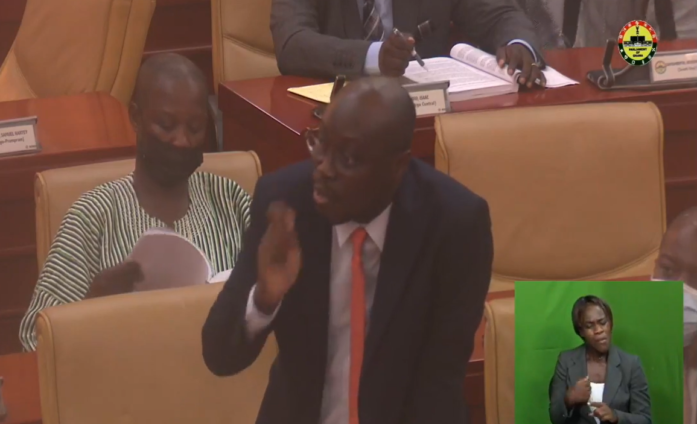 Contributing to the debate on the 2022 budget, on Tuesday, Dr. Forson diagnosed the ailment as a ‘Stagflation with Acute Debt Overhang Syndrome (SADOSES)’.

He explained that high unemployment, coupled with rising inflation, has crippled the economy and could intensify if the Akufo-Addo government continues to neglect the problem.

“Unemployment is rising at an alarming rate and becoming a national security crisis because of the negligible impact of real sector growth on employment generation,” he said on Tuesday.

He added that, “this “slow and jobless” real sector growth is an acute debt overhang. As of September, 2021, Ghana’s Total Public Debt stood at GH₵341.8 billion of which GH₵221 billion representing 65% of GDP, have been accumulated in the last four and half years. According to the 2022 budget, between January- September, 2021, the Government of Ghana collected GH₵37 billion in Tax Revenue (App 2A, pg. 227), of which 92% (GH₵34.4 billion) was used for debt servicing alone – interest payment (GH₵25.4 billion) + amortization (GH₵9 billion). This clearly is a case of an acute debt overhang.”

In treating the ‘ailment’, the Ajumako-Enyan-Esiam legislator said the country has to choose between foreign assistance and local policies.

“Our government has decided that we treat the malaise ourselves, with local medication (homegrown policies). What is crucial is the right medication and the right dosage; and if care is not taken, Ghana will be going straight into the Highly Intensive Care Unit (HICU),” he argued.

Touching on government’s decision to introduce an electronic levy, the Ranking Member described it as “a super regressive tax”.

He stressed that it will worsen the hardship of the average Ghanaian.

“We are aware that most traders and ordinary Ghanaians use Mobile money wallet as savings account, therefore, any attempt to impose a tax on mobile money transactions will be a tax on savings, – a disincentive to save – which should never be encouraged.”