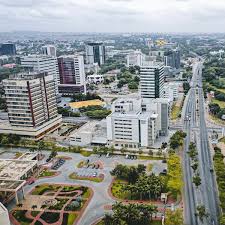 The rate of economic growth in the country is expected to fall slightly by 0.3% to 4.5% by the end of this year, the August 2021 edition of Fitch Solutions West Africa Monitor Report has revealed.

However, the size of the economy is expected to increase to $78.3 billion this year.

Though real Gross Domestic Product growth rate according to Fitch Solutions will slow down slightly next year, but it will still be at a healthy 4.5%, as base effects from the 2020 slowdown, as a result of the Covid-9 pandemic, fade.

This growth rate will however be slightly lower than the expected 4.8 percentage points growth rate for this year, which will be lifted by expansion in the agriculture and services sectors, particularly recovery in the hospitality sub sector.

It further pointed out that spending is likely to tick-up in the second half of the year as the economic recovery gathers momentum, resulting in greater demand-side inflationary pressures.

“We expect that the rise in private consumption and business investment in the coming months will result in robust real GDP growth of 4.8% in 2021, as against 0.4% in 2020”, it stressed.

It further said “we expect growth to accelerate in the coming months as the government further relaxes social distancing rules. Restrictions were tightened in quarter one 2021 in response to a second wave of infections, and have remained fairly stringent since then – despite the launch of the government’s vaccination drive on March 1. Although the pace of vaccinations slowed in late quarter two 2021 as a result of supply and distribution challenges, we expect the programme to gain momentum in second half year of 2021, thus facilitating greater reopening and a rise in consumer and business confidence”, it explained.

Meanwhile, Fitch Solutions has revised its nominal GDP or the size of the economy for this year, from the earlier forecast of $70 billion.This will translate into per capita income of $2,466.

Comparing it with the indicators for last year, the size of the economy or the total value of goods and services produced within the economy was estimated at $72.4 billion, translating into a per capita income of 2,328 dollars.

But the country still remains the 8th biggest economy on the African continent, following Ethiopia closely, which has economic size of 93.97 billion dollars.

DISCLAIMER: The Views, Comments, Opinions, Contributions and Statements made by Readers and Contributors on this platform do not necessarily represent the views or policy of Multimedia Group Limited.
Tags:
Fitch Solutions
GDP growth rate
Nominal GDP