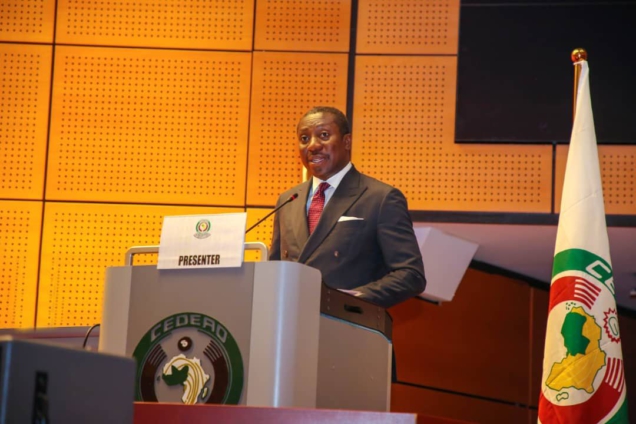 The government of Ghana has identified the northern part of the country as a potential target for terrorists in the sub-region.

This was contained in a report, presented to the ECOWAS Parliament by the Deputy Majority Leader and MP for the Effutu Constituency, Alexander Afenyo-Markin, at a sitting in Abuja, Nigeria.

The sitting, which begun on Monday is expected to end tomorrow, June 17, 2022.

According to the report, the recent surge in terrorist activities in the sub-region puts the country at greater risk of attack.

Leader of Parliament’s delegation, Alexander Afenyo-Markin however indicated that despite the threat, the National security Ministry is working around the clock to ensure the safety of the country.

“Although Ghana has not recorded an attack, the recent surge in neighboring countries puts Ghana at risk. In the past year, the Ministry of National Security set up its counter terrorism measures to avert any terrorism attack especially in the northern frontier bordering Burkina Faso due to the prevailing security situation in the country and what we have established is that the northern part of Ghana faces a high risk of infiltration”, he said.

The activities of violent extremist and terrorist groups in West Africa have been on the rise since the outbreak of the COVID-19 pandemic.

Since January 2021, high-profile attacks by groups affiliated with the Islamic State (ISIS) and Al-Qaeda have been recorded in Burkina Faso, Mali, and Niger.

Although the Sahel region of West Africa is currently the epicenter of violent extremism and terrorism (VET), the threat is gradually spilling over into the littoral States along the Gulf of Guinea.

Several coastal states along the Gulf of Guinea have recently either witnessed attacks or identified the presence of terrorist groups in parts of their territory.

Amidst these threats, Alexander Afenyo-Markin further intimated that as part of efforts by government to safeguard the country from any terrorist invasion, the government of Ghana through the National Security Ministry has launched a citizens’ awareness campaign aimed at protecting the country against terrorist attacks.

The campaign, dubbed: “See something, say something”, encourages the public to be vigilant of the activities of suspicious characters and report such activities and characters to the security agencies.

The launch according to him forms part of the Ministry’s border counter-terrorism strategy aimed at sensitizing the public on terrorism threats and encouraging the citizenry to collaborate with state security agencies to reduce the threat of terrorism in the country.

He told the ECOWAS Parliament that terrorism threat in the sub-region had evolved to a point where reliance on only conventional tactics and strategies to combat it was ineffective.

Recent developments, he observed, indicated that the attacks perpetrated in the region and the Sahel had been highly unconventional.