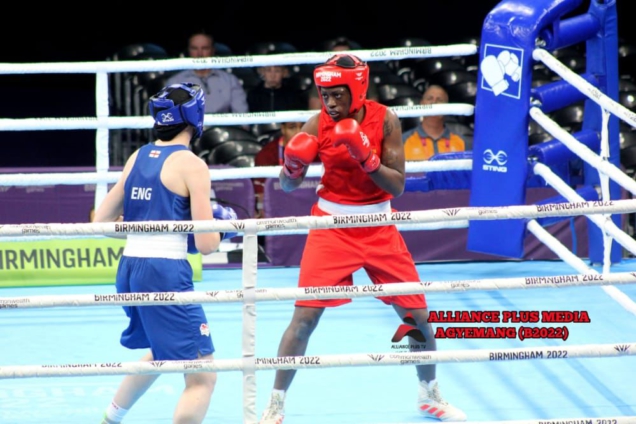 Caption for main image: Ornella Sathoud of Ghana (red) lost her middleweight boxing bout to Davis Kerry of England on Day 2 of the Commonwealth Games.

Ghana’s Ornella Sathoud, whose story drew interest because she has a PhD in Analytical Chemistry, fought today, July 29.

She lost her middleweight boxing bout to Kerry Davis of England at the ongoing Commonwealth Games.

Ornella – who has a Congolese dad and a Ghanaian mum – turns 35 this year, while Kerry is ten years younger, and was clearly faster and slicker in the fight.

Kerry is a multiple champion across several top competitors. Her mother was a national athlete for England in karate so she practiced it throughout her childhood. But she didn’t like it much. In fact, Kerry was very good at football!

It was at age 15 that she switched to boxing because she felt more proficient and could see a brighter future there.

“Football kind of went out the window as soon as I started boxing. I love it because it’s an individual sport, so even though it makes it kind of harder you don’t have to rely on anyone else. You get what you put in.”

Kerry tried two different times to make the national boxing team, and failed. This time, she made it to the Commonwealth Games.

DISCLAIMER: The Views, Comments, Opinions, Contributions and Statements made by Readers and Contributors on this platform do not necessarily represent the views or policy of Multimedia Group Limited.
Tags:
2022 CommonWealth Games:
Boxing
Kerry Davis
Ornella Sathoud