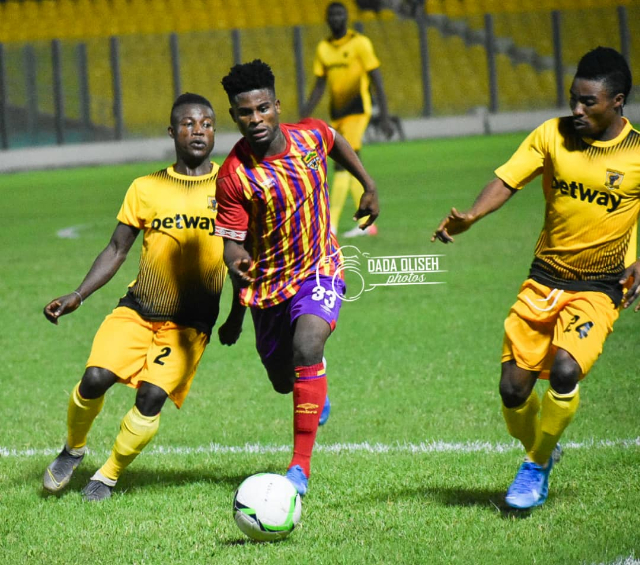 Hearts of Oak were denied a second win in four days in the Ghana Premier League following a stalemate with Ashanti Gold on Thursday night.

After securing a 2-1 win at Dreams last Sunday, the Phobians failed to make the most of their home advantage as they settled for a point against the Miners at the Accra Sports Stadium.

The draw leaves the Phobians on ninth position on the league table, five places adrift of Ashgold.

Hearts made a great start and created the first chance of the game in the 15th minute when Robert Addo’s header was saved by goalkeeper Frank Boateng.

However, AshGold responded in the 36th minute with a great effort which forced Hearts goalkeeper Richard Atta into making an acrobatic save.

Two minutes later, Hearts were unlucky not to take the lead after striker  Daniel Afriyie spurned a glorious opportunity as he failed to convert from just two yards after goalkeeper Boateng fumbled in his attempt to handle a corner.

Few minutes into the second half, Afriyie wasted another good chance, this time shooting feebly into the goalkeeper’s arm after being sent one-on-one.

Richard Atta was then called into action with a save at the other end after Appiah McCarthy shot from long range.

Hearts had a penalty shout ignored by the referee three minutes later before the Phobians found the back of the net only to see the goal denied for offside.

Five minutes to full-time, Hearts went close once again but Kofi Kordzi’s glancing header went off target, the attacker having connected to a Benjamin Eshun cross.

DISCLAIMER: The Views, Comments, Opinions, Contributions and Statements made by Readers and Contributors on this platform do not necessarily represent the views or policy of Multimedia Group Limited.
Tags:
Ashanti Gold
GHPL
Hearts of Oak