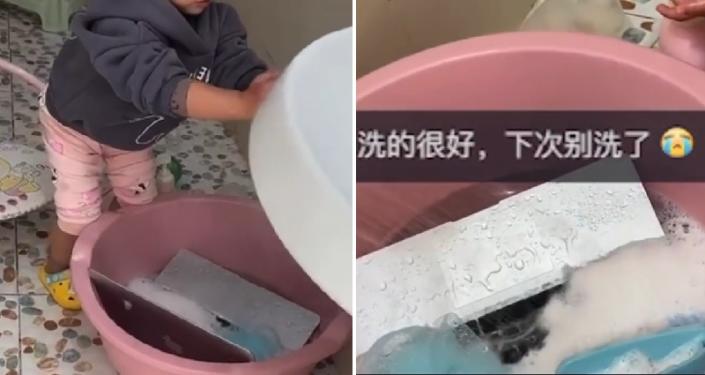 A 2-year-old girl in China washed her father’s MacBook with soap after hearing him say it was full of “trash” during breakfast.

The incident happened inside the family’s home in China’s Shandong province on October 20 when the girl’s mother, Zhang, heard the water running inside their bathroom.

Zhang was shocked to find her husband’s MacBook submerged in soapy water and their daughter preparing to wash the laptop with more soap.

Zhang filmed the incident and later shared it online. The video shows the 2-year-old girl, nicknamed Duomi, washing the “dirty” laptop in a basin with water running over it.

She prepares to lather the laptop with more soap before her mother pulls the MacBook out from the water.

“Her father was asleep and snoring loudly. I heard someone was doing something in our bathroom,” the mother reportedly told local newspaper Jinan Times. “I entered the bathroom and saw what my daughter was doing. I almost died from anger.”

She later explained that their daughter heard her father, surnamed Wang, complaining that “there was too much trash on his computer” while eating breakfast and took it upon herself to help clean it for him.

Zhang tried to turn on the 9,000 yuan (approximately $1,245) Apple laptop shortly after and again days later but to no avail. While the mother admitted she felt angry at first, she could not help but be amused by her daughter’s gesture to help her father.

“At that time I really wanted to hit her to teach her a lesson. But my second thought was that she is too young to understand what she did was wrong,” she said.

The video reportedly went viral on Weibo, where it has been viewed over 100 million times. Some users found humor in the viral clip, with one writing, “What a good job she’s done! Only thing is that it wasted a computer.”

Another Weibo user shared a similar experience they had with a family member, writing, “My younger sister liked washing mobile phones when she was two-three years old. My father’s, my mother’s and my mobile were all put in the water by her. She has been beaten for this, but she didn’t remember the lesson.”

DISCLAIMER: The Views, Comments, Opinions, Contributions and Statements made by Readers and Contributors on this platform do not necessarily represent the views or policy of Multimedia Group Limited.
Tags:
2-year-old girl
China
MacBook laptop