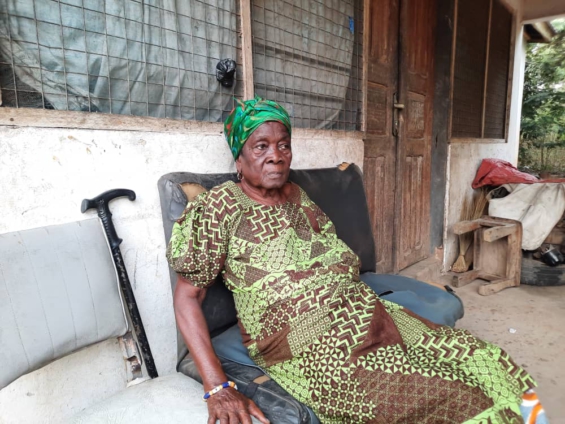 A 108-year-old woman has been thrown into a state of depression after she was served a notice to vacate her six-bedroom building to pave way for railway construction in the Volta Region.

Hana Sesi Abla in an interview with JoyNews described as wicked the move by the Ghana Railway Development Authority (GRDA) to evict her from the home her son constructed for her some years ago.

Checks by JoyNews revealed that some people have been compensated for leaving others including Madam Abla, a situation the affected residents said is frustrating and unfair.

According to her, the amount quoted to be paid by the Authority was rejected by them because it was inadequate and cannot build them a decent home.

Madam Abla is calling on government to ensure that she is relocated to a better or similar facility before her current home is demolished.

“I want the government to pay good money for my son to build another place for me. I’m an old lady, my children built this place for me some time ago, now I am really worried about the news of demolishing.

“Meanwhile, we built here before the coming of the project and it’s not the other way round…I’m now sick over this development,” she stated.

The Tema-Mpakadan railway is expected to pass through parts of the North Tongu District in the Volta Region including Juapong.

Many households and farm lands among other properties has been affected by the development.

Defending the stance of the family not to take the compensation, Mawuli Vorsah, a great-grandchild of Madam Abla said the amount is not enough to put up similar building elsewhere.

The visibly frustrated relative said, it was unfair to hurriedly demolish their property without adequate compensation.

“We wrote a letter to them [GRDA] asking them to re-value the house and consider all the economic activities in the house.

“The old lady was a potter but she cannot work anymore. We are doing the business to sustain us alongside selling oranges with fruits,” he said.

He said his great grandmother has been worried and traumatised over the development and the back and forth which is getting them nowhere.

“We want them to know that this house is for the old lady and she is panicking every day. Whenever she sees a stranger she is terrified and we cannot cope with the emotional trauma anymore,” he wept.

Other affected residents including a 73-year-old farmer said he was compensated with just ¢1,000 for his farm with seven mango trees, three soursop trees, two orange trees ,15 palm trees and two grape trees.

“We are told that they can only pay after three years and it is really disturbing,” he lamented

Although most of the affected residents were expectant the development of the railway will open the area up for booming economic activities, they said in unison, “that must not happen at our detriment.”

They are, therefore, appealing to government and the GRDA to consider a re-evaluation of their properties, compensations and if possible re-settle them at where they will find peace.

DISCLAIMER: The Views, Comments, Opinions, Contributions and Statements made by Readers and Contributors on this platform do not necessarily represent the views or policy of Multimedia Group Limited.
Tags:
North Tongu
Railway
Volta Region