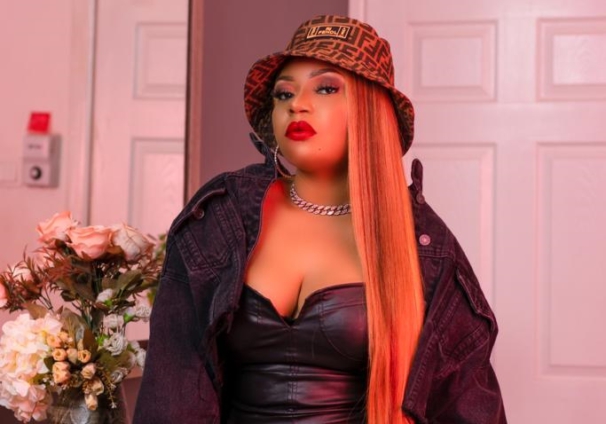 After cementing her music prowess with her “We Don’t Play” song, rapper Gifty Asante known by her stage name Givtti has dropped official visuals for her newest song dubbed We Outside.

The drill song which features rapper Kantex Kapo and was produced by popular producer ATown TSB, is steadily garnering numbers on the video streaming app, YouTube.

The visuals were directed by Kojo Myles.

Givtti is gradually climbing the ladder in the Ghana Music Sphere as one of the most active budding female rappers who is poised to break barriers and put her brand on the map.

Her creative style and talent when it comes to her music is a gem many hardly come by.

Meanwhile, Givtti was formerly known as Gifty Asante in the Ghanaian movie space but she rebranded to Givtti when she started churning out songs.

She featured in TV shows such as The Whatsup Online and Efiewura series, before venturing into music in 2021.

Growing up in a family of musicians, she started singing with her brother whiles they were young.

Because of the passion she had for music and her stage craft, she was nicknamed “Beyonce” in Abuakwa State College where she attended Senior High School.

The Hip-Hop and Afrobeat artiste recently released her first single “We Dont Play” which is receiving a lot of air play because of the fire the song brings. She has then released another banger “We Outside” few months after “We Dont Play”.

Her genre of music is a combination of trap, drill, and Afrobeat, which is enjoyed by a lot of foreigners and a large number of Ghanaians.

Givtti is still in talking terms with a top notch record label “Narrow Records” who is willing to sign her.

The Ghanaian-USA-based artiste is working tremendously to feature both national and foreign artists on her upcoming projects.

Givtti is definitely the new female rap sensation the world should look out for and is here to stay.

DISCLAIMER: The Views, Comments, Opinions, Contributions and Statements made by Readers and Contributors on this platform do not necessarily represent the views or policy of Multimedia Group Limited.
Tags:
Givtti
Kojo Myles
We Outside