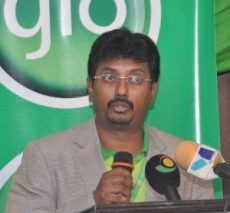 In a congratulatory message extolling the team’s sterling performance on Saturday against an unpredictable and determined Cape Verde side, the Management of Glo Mobile Ghana said it was a matter of course that the Black Stars would win its game and cruise comfortably to the final.

‘You would recall that long before the start of the tournament, we at Glo have maintained that the Black Stars are on the verge of making history at AFCON 2013, by breaking Ghana’s 31 year old jinx in Nations’ Cup victories. We are happy to note that the steady progression in the performance of the team so far proves us right,’ Glo Mobile Ghana Head of Business John Vasikaran said in a statement.

He said just like the stars did in the Cape Verde game, “we urge you to close your ranks, stay focused and be unrelenting in all the disciplines of the game so that you can easily defuse any threats from your next opponents – Burkina Faso, who we all know, is already awed by your respectable pedigree in African football.’

Incidentally, at the last Glo-CAF Awards held in Ghana on November 20, 2012, a South African magician predicted in his baffling 10 minute act that Ghana and Nigeria will reach and play the final game of AFCON 2013 but stopped short at naming which of the two West African rivals will win the trophy.

Glo Mobile Ghana has sponsored the Ghana Black Stars over the past five years, along with Ghana’s Premier League of which the African telecoms giant is the headline sponsor and only recently payed over $2 million to the Ghana football Association in fulfillment of the company’s pledge to support the Black Stars and promote the development of football in Ghana.