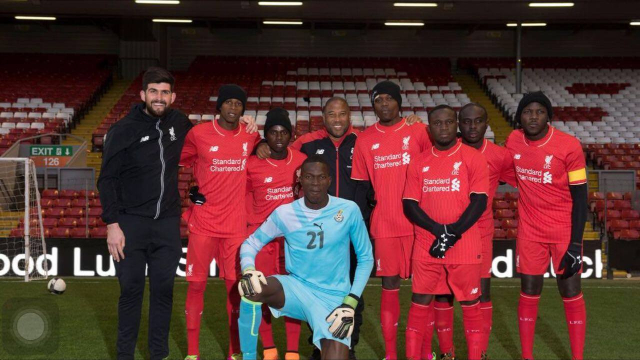 The tournament was played immediately after the 2-2 draw between Liverpool and Newscastle on April 24 in an all play all five-a-side format on the Anfield pitch. Each team was coached by one Liverpool legend.

There were a few missed chances on both sides leading to an eventual result of a goalless draw.

The GNPC lads played under their assigned coach, John Barnes who was assisted  by Eugene Kwasi Ohene a.k.a Bomber,  turned out a more improved side on in the second Group Ben game against Singapore which ended a 1-1 draw.

The Asians jumped into the lead a about 4 minutes into the game. This sparked a major fight back from the Ghanaians whose efforts were rewarded with an equalizer six minutes later.

The last group game against the US was to turn out one of the highest scoring match of the tournament with the GNPC lads hammering then 6-2. This win secured the ticket to the quarter finals.

Ghana (GNPC) was in devastating form and gave proof of it when they put 6 unanswered goals past the England team to book a place in the semis with in- form South Korea.

The journey ended for Ghana in the semi final after losing 3-2 to the South Koreans who dominated in midfield and attack. South Korea eventually lost 3-1 to Kenya in  the final.

GNPC made a great impression on the tournament as some staff travelled with the team to cheer continuously in the stands.

The conspicuous presence of their CEO, Alex Mould and Head of Investor Relations, Linda Tamakloe and some members of staff provided great motivation for the players. Mr Mould gave them some pep talk before and during the games and had a great influence on the team.

In a  interview Alex Mould told Joy Sports "we may be disappointed we did not win the ultimate trophy but we are grateful for the opportunity. My lads played well displayed a great fighting spirit. I am proud of them."

The trip was facilitated by Standard Chartered Bank who are the main sponsor for Liverpool Football club.

Asiedua Addae who is in charge of Corporate Affairs, Brand and Marketing at Stanchart Bank Ghana congratulated the team for a good performance.

"The big trophy may have eluded us but we have left a big impression on this tournament.  GNPC surely deserve commendation and the fact that their CEO Alex Mould took time off his busy schedules to motivate the team personally tells how much value was placed on this event. As sponsors we are happy for a success tour and pray Ghana wins next year."

Similar were views shared by Mark Rollings the Head of Group Sponsorships of Standard Chartered Bank.

Teams from Hong Kong, USA, England, Kenya Ghana, South Korea and Singapore a were taken on tours at Melwood the training Ground of Liverpool, their home stadium at Anfield, the Liverpool Academy in Kirksby and the Beatles Story, a music museum on the dock yards of the Mersey River and club which was the home of the legendary group the Beatles.

GNPC defeated Team Multimedia in the Ghana final on March 12 at the Lizzy Sports Complex to qualify as the first team from Ghana to play in the prestigious event.