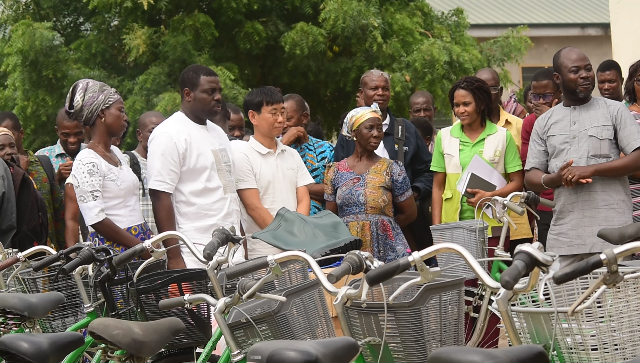 A non-governmental Organization, Good Neighbors Ghana, has equipped thirty-nine community health volunteers with motivational tool-kits to enhance their healthcare delivery in the Adaklu District of the Volta Region.

The tool-kits included a bicycle, torchlight, wellington boots, raincoats and an Identity Card.

The presentation forms part of the organisation’s  Maternal and Child Health Improvement Project (MaCHP) which was introduced in the district in 2017.

The MaCHP project which is being implemented in twenty communities is aimed at reducing maternal and child mortality in the district, which is populated with isolated communities.

The project saw the training of health staff to strengthen the district’s CHP system, while 30 health facilities were provided tablets to help collate and process data to enhance management of cases for improved service delivery.

Some thirty-nine community health volunteers and members of Community Health Management Committees were trained as well, under the project.

The Country Representative of Good Neighbors Ghana, Ilwon Seo, explained after two years of implementing the project, his outfit and the Ghana Health Services (GHS) identified the need to equip the health volunteers, to make them more efficient.

“We agreed to give the volunteers a tool-kit, which included a bicycle, to help them move around the communities, a torchlight and raincoat”

“The volunteers are not paid, hence, we decided to give them ID cards, to at least give them some identity in the community”, he added.

Mr Seo however, indicated the project would be rolling out after six months but urged the District Health Directorate to ensure the volunteers remain committed to their services.

He expressed optimism provision of the motivational tool-kit would take the district a step closer to achieving universal health coverage.

A volunteer, Bernard Amedzudzor, expressed delight at the gesture, hoping the items would help them extend their services to hard to reach areas in the district.

The MaCHP project is also being implemented in twenty communities, in the Upper Manya Krobo district of the Eastern Region.

DISCLAIMER: The Views, Comments, Opinions, Contributions and Statements made by Readers and Contributors on this platform do not necessarily represent the views or policy of Multimedia Group Limited.
Tags:
Adaklu District
Good Neighbours Ghana