Govern with the people’s interest in mind – Curren Price Jr. to African leaders 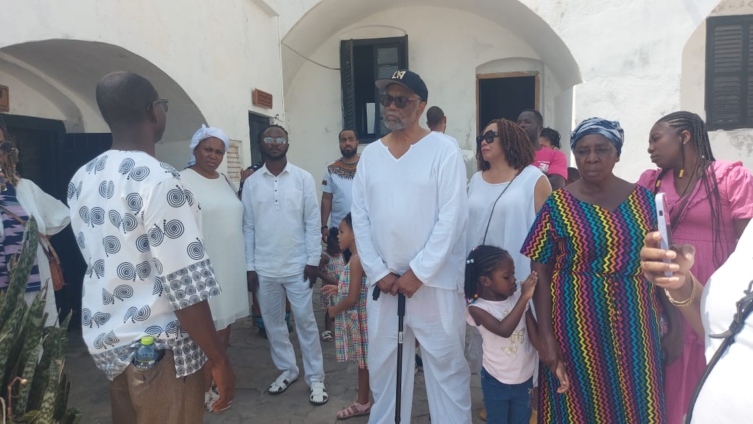 The Council member for the 9th District of the city of Los Angeles, USA, Curren D. Price Jr., has urged all leaders across the length and breadth of the world to govern with the citizens’ interest in mind.

This comes in the wake of calls for individuals at the helm of affairs to ensure that the basic necessities needed for life to be better for citizens are provided.

Speaking after a visit to the historic Cape Coast Castle on Sunday, December 25, 2022, Curren D. Price Jr. recalled the ordeal their ancestors passed through at the hands of their masters. The Councilman said that it was barbaric for a man to treat his fellowmen in that manner and have no sense of empathy.

Curren Price Jr. expressed worry at how mental slavery continues to hamper progress in most of the states in Africa, stressing the need to ensure that leaders come up with policies that will lessen the burdens of the citizens.

He said it is just a privilege to be given the mandate to be in a high office of leadership and must not be used for self-aggrandizement.

“Today, that kind of slavery, where men and women were captured and kept in the dungeons, is no more. However, other kinds of slavery, like famine, meager salaries, corruption, genocide, war, and terrorism, have made their way into the world, particularly in Africa.

In 2021, Curren D. Price Jr., initiated the charge to implement a guaranteed basic income program in Los Angeles. The initial $6 million he proposed for a Council District 9-only program turned into a nearly $40 million program that will benefit more than 3,000 households that will receive $1,000 a month for one year in 2022.

“This was a clear demonstration of governing with the people’s interest in mind, as it went a long way to assuage the sufferings of many at the time COVID-19 was prevalent,” he said.

Council member Curren D. Price co-presented a motion with six other Council members that requests the development of an unarmed model of crisis response that would divert non-violent calls for service, which include calls related to mental health, substance abuse, and neighbour disputes, away from the Los Angeles Police Department (LAPD) to the appropriate non-law enforcement agencies. An RFP has been written and is being reviewed by the Public Safety Committee.

The above and more were areas Curren D. Price Jr. initiated as a way of leading by example and ensuring that the citizens’ interests are taken into account in the process of governance.

On the African perspective of governing with the people’s interest at heart, Curren D. Price Jr. called for policies that provide better education, good health care, and good road networks, among other equally good social interventions needed to make life better for every citizen.

“African leaders are uniquely capable of bringing to the forefront policies that empower citizens and create an enabling environment for improved living conditions. That way, issues of social vices, terrorism, coups d’état, and other related issues that hamper African progress will be minimized,” he said.

Councilman Price Jr. also touched on an all-inclusive style of government as a panacea to most of the issues of the continent. According to him, winners of an election will see it as prudent to bring on board those who lost, and a conducive atmosphere will be created for proper deliberations on policies that are feasible and will be of immense benefit to the citizenry.

To this end, he advised against vindictiveness that continues to characterize the African political environment whenever power changes hands.

He also used the occasion to call for a united front to deepen Ghana’s democracy and to remind the youth of the importance of hard work and honesty in all they do.

DISCLAIMER: The Views, Comments, Opinions, Contributions and Statements made by Readers and Contributors on this platform do not necessarily represent the views or policy of Multimedia Group Limited.
Tags:
Curren D. Price Jr.