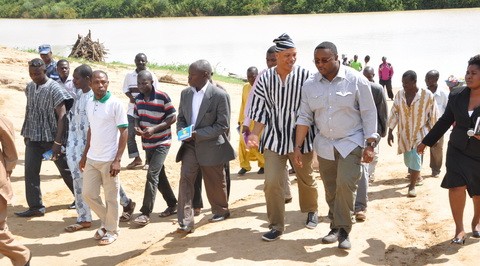 Deputy Minister for Local Government and Rural Development, Elvis Afriyie Ankrah has called on the traditional leaders and populace of the Northern Region to eschew violence and embrace peace to ensure speedy development of newly created District Assemblies.

The visit aims at ascertaining the level of preparedness of the newly created districts before inauguration; this was initiated by the Government of Ghana to bring governance through decentralization to the doorstep of the ordinary Ghanaian.

Touching on issues that will bring development to the area, Mr. Afriyie Ankrah stressed on the need for peace, adding “peace should be the hallmark of the nation especially the Northern region hence a newly created district should not start with controversies but peace”.

The Deputy Minister further urged them to dispel the notion that the newly created districts have political undertones but rather see it as a great opportunity for job creation and capacity building.

In his contribution, the Minister of State who doubles as Member of Parliament for Garu Timpani, Dominic Azumah indicated that to fast track the development of the country, decentralization is paramount and must be used as a tool to reach the local people.

Mr. Azumah asked the benefactors of the districts to turn deaf ears to issues that will undermine Ghana’s democracy and development as well.

Regent of Dagbon Traditional area, Kampakuya Na Abdulai Andani expressed deep appreciation to government and declared his support to in ensuring peace in the area.

With regard controversies on the selected capitals of the newly created district, Na Abdulai Andani explained that it is solely an administrative issue and not traditional hence, urged the people to adhere to them stating that, it is not only district capitals that will enjoy the developmental projects but all the areas under the newly districts will have their fair share of development.

In a related development, the Deputy Minister was crown Kitsitowura (Helping Chief) of North Gonja Daboya Traditional area and was decorated with Fugu alongside the Minister of State, Dominic Azumah and Mr. Kofi Agama, Projects Director of the Ministry of Local Government and Rural Development.