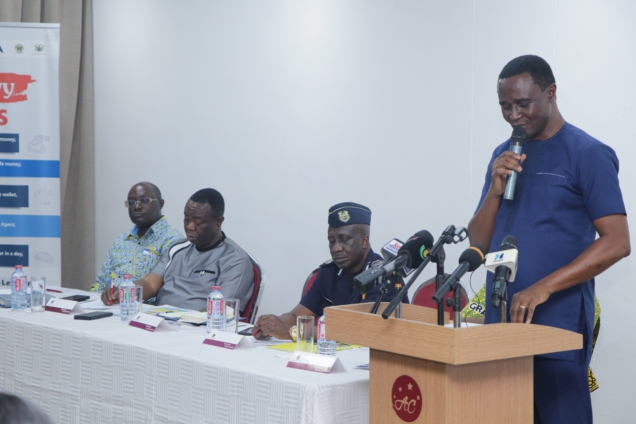 Dr. Amishaddai Owusu-Amoah delivering a speech at a seminar

Government bagged ¢51.58 billion in revenue in the nine months of this year, missing the target narrowly by 0.89%.

However, the performance represents a nominal growth of 29% over the same period in 2021.

In a tweet, the Ghana Revenue Authority (GRA) said domestic revenue grew by 28.6%.

At the same time, customs revenue grew nominally by 29.8%.

It is expected that government will accrue more revenue in the third quarter of 2022 because historically revenue mobilisation goes up in the last quarter of every year.

E-Levy rakes in 328m since implementation in May

Meanwhile, government earned ¢328 million from the Electronic Transaction Levy (E-Levy) at the end of the third quarter of this year.

According to the GRA, it recorded 20% month-on-month improvement in the collection of the levy since its implementation in May 2022.

“It is worth mentioning that on month-on-month basis we continue to see a 20% improvement in collection of the levy. It is therefore our expectation that this will continue and improve domestic revenue generation to support government expenditure”, the Commissioner-General, Dr. Amishaddai Owusu-Amoah disclosed.

The government had initially projected ¢6.9 billion from E-Levy collections for 2022, but revised it to ¢4.9 billion and later to ¢611 million.

Meanwhile, the GRA says it has automated the process of obtaining Tax Clearing Certificates (TCCs), and therefore tax payers can now apply for TCCS electronically via the Taxpayers portal.

Again, it has also acquired a USS code that will allow every Ghanaian to check on their tax compliance status. This tax code the GRA said will be made public soon.

DISCLAIMER: The Views, Comments, Opinions, Contributions and Statements made by Readers and Contributors on this platform do not necessarily represent the views or policy of Multimedia Group Limited.
Tags:
E-Levy
GRA
Rev. Dr. Amishaddai Owusu-Amoah
Tax Revenue