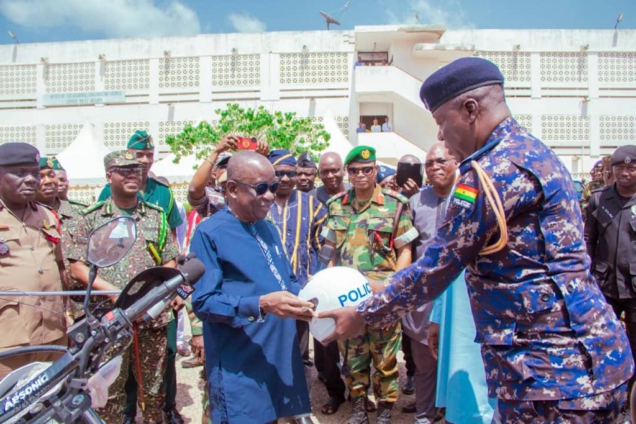 The National Security Ministry has reiterated its commitment to resourcing the security services of Ghana to enhance ongoing efforts to safeguard the peace and stability of the country.

Speaking during the presentation of a total of eight pick-ups and 95 motorbikes along with crash helmets to State Security and Intelligence Agencies in the Upper West and Upper East regions last Friday.

Sector Minister, Albert Kan-Dapaah, explained that notwithstanding the prevailing economic conditions, there was a need to prioritise the security of the country.

Mr Kan-Dapaah, therefore, called on personnel of the various security agencies within the two regions to remain on high alert to curb the infiltration of terrorist and extremist elements into the country.

He also expressed appreciation to the personnel of the various state security agencies in the regions for their good work.

The National Security Minister called on Ghanaians, particularly residents of the two regions, to support the work of security officials towards preserving the peace and stability of Ghana.

The recent donation comes on the back of efforts by the Ministry to retool State Security and Intelligence agencies.

This, he said is to respond adequately to the growing threat of terrorism in neighbouring countries given the relentlessness of terrorist and extremist elements to advance their expansionist ambitions to the coastal West African States.

DISCLAIMER: The Views, Comments, Opinions, Contributions and Statements made by Readers and Contributors on this platform do not necessarily represent the views or policy of Multimedia Group Limited.
Tags:
Albert Kan-Dapaah
National Security Ministry
Upper West Region