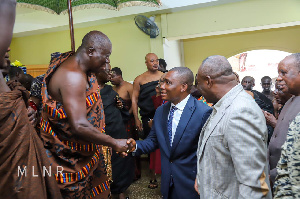 The Asantehene, Otumfuo Osei Tutu II, has given a seal of approval for Newmont Ghana’s ground-breaking $850 Ahafo project.

Otumfuo’s blessings for the project which he announced on Monday, April 11, 2022, follows series of engagement and briefing by the Ministry of Lands and Natural Resources, Newmont Ahafo and the affected community chiefs.

Addressing the delegation, Otumfuo Osei Tutu II said he is convinced beyond doubt that the project will serve the interest of the communities.

He cautioned the communities who are resisting the laudable project to consider the enormous benefits it will bring to their people.

The Asantehene warned that the interest of a few people should not override the collective interest of the communities and the country and hinted of possible sanctions for chiefs who stand in the way of the Newmont project.

He said he has been informed of the company’s plans to embark on impactful projects in the communities in the area of roads, education, health among others.

He urged the feuding parties to engage and find a common ground to allow the project commence peaceful.

He also commended the government for acting through the Ministry of Lands and Natural Resources by engaging the chiefs and protecting the interest of the local people.

He, however cautioned that promises made by Newmont must be fulfilled to the letter.

The Deputy Minister for Lands and Natural Resources responsible for Mining, George Mireku Duker, who led the delegation on behalf of the sector Minister eulogized the Asantehene for his immense support towards the commencement of the project.

He applauded him for his wise counsel on issues, noting that his role in the country’s socio-economic dispensation cannot be over-emphasized.

The blessing by Otumfuo paves way for the commencement of the project this month.

It is expected that the project would provide thousands of direct and indirect jobs and contribute to the country’s economy.