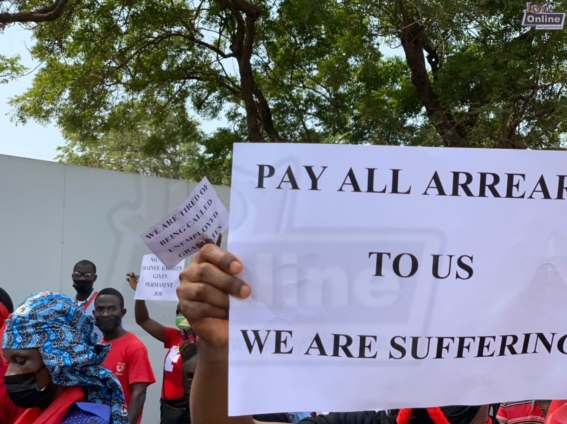 Prior to the demonstration on Thursday, February 17, 2022, some protestors accused government of abandoning them.

Government has paid one out of the ten months’ arrears owed beneficiaries of the Nation Builders Corps (NABCO) programme.

The President of the NABCO Trainees Association of Ghana (NABTAG), Dennis Opoku Katakyie disclosed this in a press release issued on Friday, September 23.

“NABCO trainees are hereby informed that stipends’ payment for November 2021, as one month’s settlement of the ten months arrears, has been processed.

In actuality, nine months, counting from December 2021 through to August 2022, are still outstanding.”

However, they are unhappy with just a month payment.

They are thus asking the the government, particularly the Ministry of Finance, to ensure the stipends are paid in full.

He said should their call be ignored, they will explore other avenues to compel the government to do so.

“If after a considerable period of time, arrears for the remaining months are not fully paid, the leadership will recruit another draconian measure to forcibly ensure that we are paid. We have done it before, so we can do it again.”