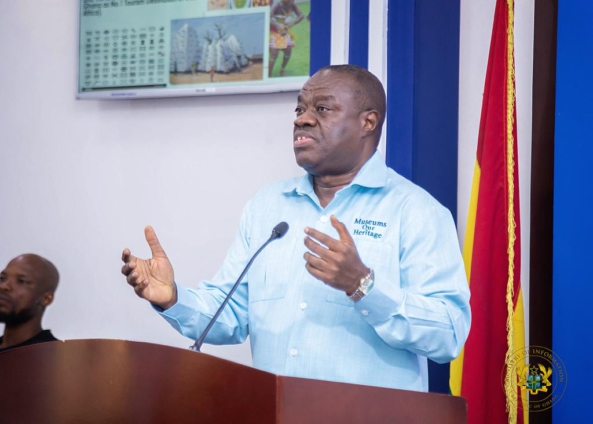 Tourism Minister Dr Ibrahim Mohammed Awal says about ¢350 million is to be expended to modernise tourist attractions across the country.

The government, he said, with support from the World Bank, was providing funding for the project, in line with its commitment to make the sector a veritable tool for economic transformation by 2023.

“It will contribute to job creation and wealth for the people. According to the World Bank, two out of every 10 jobs are created by the tourism sector,” Dr Awal said.

The Minister, who was addressing the media in Accra yesterday, added that so far ¢1.5m of the funds had been spent on rehabilitating the National Museum.

Some of the sites to benefit from the modernisation project are the Pikworo Heritage and Slave Camp, the Bonwire Kente Museum, the Yaa Asantewaa Museum in Ejisu, the National Museum and the Kwame Nkrumah Memorial Park.

Others are the Elmina Castle, the Kakum, the Shai Hills and the Mole National parks; the W.E.B. Du Bois Centre and the construction of five multipurpose domes or amphitheatres for performances within the creative arts space.

According to Dr Awal, the country had a comparative advantage in the tourism and hospitality industry in West Africa, hence investing and giving the sector a facelift was necessary.

“About 65 per cent of all edifices used during the slave trade are located in the country and is used to boost heritage tourism.

“Ghana is also a host to the secretariat of the African Continental Free Trade Area (AfCFTA), which position’s the country as a venue for meetings, conferences and events,” he said.

The Minister added that the country was not only at the centre of the world but was also politically stable and an attractive investment destination.

He further said his outfit is determined to be the number one contributor to the country’s gross domestic product (GDP), for which reason “we are building capacity in customer care, domestic and international tourism drive and product development”.

According to him, there were 534,711 domestic tourism visitations from January to September 2022, compared to 334,921 visitations in the same period in 2021, saying “our projection is to achieve one million domestic tourists by the end of 2022”.

Dr Awal also said some policies would be reviewed to serve the industry better.
He further said the ministry was working towards making the country a “hub of enjoyment” in December this year.

DISCLAIMER: The Views, Comments, Opinions, Contributions and Statements made by Readers and Contributors on this platform do not necessarily represent the views or policy of Multimedia Group Limited.
Tags:
Dr Ibrahim Mohammed Awal
Tourism ministry