Government urged to pay attention to Bamboo and its economic benefits 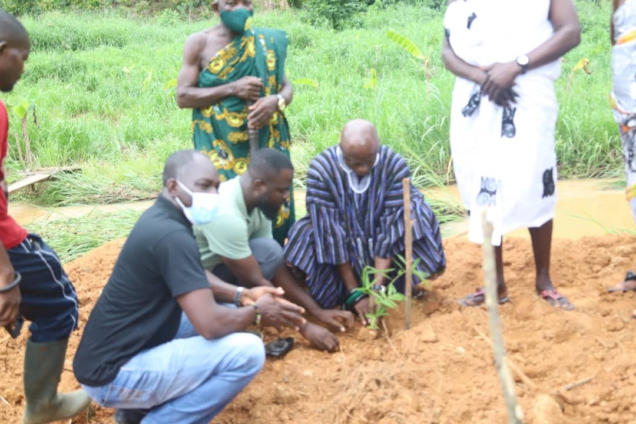 Government is being urged to consider a national policy on bamboo plantation as a way of saving the depleting forest reserve cover in the country.

At a ceremony to commence a bamboo plantation at Akyem Sagyimase near Kyebi in the Eastern Region, National Coordinator of the Bamboo and Rattan Organisation Mr. Michael Kwaku hinted that China generates millions in foreign exchange from Bamboo.

He said Bamboo development could lead Ghana to attaining or achieving most of the sustainable development goals.

He added that, bamboo has the potential of extracting toxics from contaminated soil and also a resource for climate mitigation. He said it is considered a good species for carbon sequestration.

At the Okyenhene’s Palace, the Okyenhemaa Nana Adutwumwaa Dokua hinted that, the Okyenhene would be ready to facilitate the release of arable land for bamboo plantation to help create jobs.

Okyenhemaa Nana Adutwumwaa Dokua said, Bamboo production could be a major livelihood for the youth who have been rendered jobless as a result of the ban on illegal mining.

She said government’s One-District – One-Factory policy could explore other enterprises that will transform bamboo into door panels, plywood, tables and chairs , charcoal production and other artifacts leading to poverty alleviation.

Nana Dokua added that, bamboo was very common in Okyeman and everywhere that river flows but activities of illegal mining has destroyed the bamboo plantation in Okyeman.

Bamboo according to her was used to preserve rivers in the dry season and kept the river from pollution.

Executive Secretary of the Okyeman Environment Foundation, Mr. Kofi Gyimah noted that the outfit is collaborating with the International Bamboo and Rattan Organisation to plant and nature bamboo along the banks of the Brim River to protect it.

The World Bamboo Day is a day set to increase awareness on bamboo globally.

Where bamboo grows naturally, there are some elements, but its utilization has not always been sustainable due to exploitation.

The World Bamboo Organization aims to bring the potential of bamboo to a more elevated exposure to protect natural resources and the environment.

This will ensure sustainable utilization, promote new cultivation of bamboo for new industries in regions around the world, as well as promote traditional uses for community economic development.

DISCLAIMER: The Views, Comments, Opinions, Contributions and Statements made by Readers and Contributors on this platform do not necessarily represent the views or policy of Multimedia Group Limited.
Tags:
Akyem Sagyimase
bamboo
Okyenhene