Government will not countenance misconduct of public officers – Dan Botwe 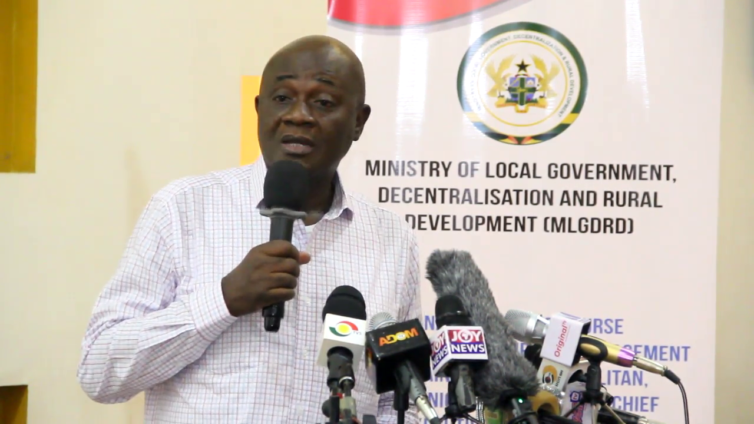 The Local Government Minister, Dan Botwe has reiterated that the Akufo-Addo government will not approve of any misconduct from any public officer.

He said government will continue to advise public officers, who are required to serve the people, to do things right.

This comes on the back of the government’s suspension of the Municipal Chief Executive for Sekondi-Takoradi, Abdul Mumin Issah, from office, pending an inquiry into his encounter with a Police officer on February 3, 2022.

The MCE, whose suspension was on the instruction of the President, Nana Akufo-Addo, was arrested but has been granted bail by the court.

“The President’s instruction should let people know that the government will not countenance any conduct of public officers that would send wrong signals unnecessarily”, Dan Botwe said.

He said the President felt under no circumstances should the MCE have made the comments he made, hence the action taken pending a full report by the Western Regional Coordinating Council.

“The matter is in court. He has been granted bail, and certainly we would also be careful that, no matter what, nothing should be done to prejudge the case”.

“It’s in the interest of the government that when we go to serve the people, we serve them. And if it comes to the point that people have to be advised to do the right thing, the government will not hesitate to do that”, he stressed.

Mr. Botwe, who is also the MP for Okere, spoke to the media in Sunyani on Saturday at a zonal refresher course on Leadership and Management Training for Metropolitan, Municipal, and District Chief Executives (MMDCEs) from the Bono, Ahafo, Ashanti, and Western North Regions.

The three-day course, a follow-up of the national orientation programme last year, provides an avenue for the MMDCEs to share experiences with resource persons and policymakers and enable them to re-strategise and find practical approaches to solving local developmental challenges.

It is also to help them develop new leadership and managerial competencies and professionalism to enhance their performance as the chief representatives of the Central Government in the district as stipulated by Article 243, Clause 2(c) of the 1992 Constitution.

In his address, Mr. Botwe reminded the MMDCEs of the caution, during the orientation, by Nana Otuo Siriboe, Chairman of the Council of State, to avoid needless confrontations with traditional authorities, MPs, and Assembly Members; respect and show empathy to the citizenry, and not be armchair administrators.

“Nana Chairman also cautioned and entreated you to avoid being carried away by the title “Honourable’’ and the fringe benefits of the job, but rather serve the good people of your localities”, he said, adding that the course will offer some practical lessons in that regard.

To help the MMDCEs to succeed in the performance of their functions as well as deepen local governance and decentralization programmes, Mr. Botwe assured of his determination to prioritize their training and development throughout their tenure.

“The Institute of Local Government Studies (ILGS) is being retooled and revamped to be able to provide structured training to all categories of local government functionaries and staff,” he said.

He further noted that various executive courses are being designed to expand MMDCEs capability to lead, inspire, and achieve.

The Ministry, Mr. Botwe said, has initiated processes to develop a feedback ICT-based system, known as ‘Dashboard’, to have direct feedback from MMDCEs, and among other things ascertain the quality of work and their responsiveness to the government business at the Assemblies.

Second term DCE for Tano South, Collins Offinam Takyi, said their responsibilities are such that if care is not taken, the tendency to go off track with frustrations is high when slightly provoked.

He, however, believes the continuous building of their capacities would make them relate better with other stakeholders and enhance the discharge of their mandate to the benefit of the citizenry.

On her part, the Bono Regional Minister, Justina Owusu Banahene, told the MMDCEs that if Ghana is to be self-reliant, “there must be conscious efforts to scientifically design frameworks to maximize local revenue generation efforts and eliminate the leakages.”

She urged the MMDCEs to be worthy ambassadors and project the good policies and programmes of the NPP Administration and further lead in the implementation of the government policies for the benefit of all.