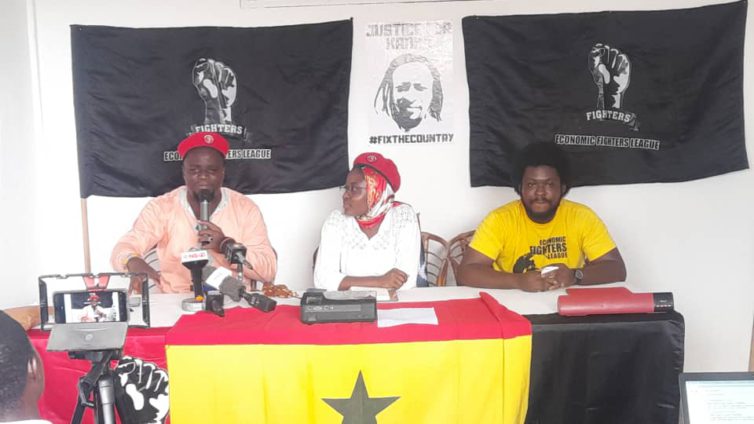 The Economic Fighters League has expressed doubts about the sincerity of the government’s plan to create 1 million jobs for the youth, starting next year.

The intervention, dubbed “YouStart,” was announced by the Finance Minister, Ken Ofori-Atta when he presented the 2022 budget.

“The YouStart initiative, proposes to use GH¢1 billion each year to catalyze an ecosystem to create 1 million jobs and in partnership with the Finance Institutions and Development Partners, raise another 2 Billion cedis,” Ken Ofori-Atta said on Wednesday, November 15.

But the Economic Fighters League believes that the intervention is a political gimmick.

Speaking on Joy FM’s Top Story on Monday, Fighter General of the League, Hardi Yakubu said that “Ghanaian politicians have mastered the art of deception and they are able to come up with slogans that have the purpose of bamboozling the public into believing that there is some scintilla of hope in whatever promises they are making”

He described the ‘YouStart’ intervention as a “deliberate attempt to lag the angst of the people against the increasing hardship that is now going to be exceedingly increased to an unbearable level.”

“It’s a gimmick and we come to this conclusion based on historical experience on how political operatives have used measures and languages that are very catchy just so people can forget about the hardship,” he told host Evans Mensah.

Describing the 2022 budget as one that presents “no hope for the people of Ghana,” the League has urged the public to join in Friday’s planned demonstration.

The planned protest, scheduled for Friday, November 26, is being spearheaded by the FixtheCountry Movement.

According to leaders of the Movement, certain aspects of the Budget are inherently “ridiculous”, hence their decision to resent it.

In a statement, they further said that the 2022 Budget smacks of “purposeful deceit” and “the absence of truth and genuine accountability”, a situation the conveners say they will not tolerate.

They are, therefore, imploring the 275 MPs to outrightly reject the 2022 Budget estimates, which were tabled before Parliament on November 17.

“The protest is to register our displeasure at the ridiculous proposals of the 2022 Budget and demand Parliament not to approve the Budget in its current form,” the statement said. The protest is expected to begin from the Tema Station in Accra, near the National Hockey Stadium, after which the protestors will head to the precincts of the Parliament House.