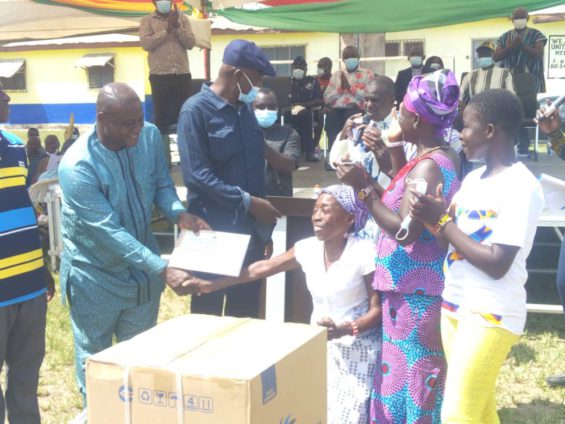 The Okere MP, Dan Botwe, has assured farmers of government’s commitment to drastically reduce post-harvest losses which have become the challenge of many farmers across the country.

According to him, it is for this reason that government is expanding and constructing roads in farming areas, especially in his constituency, to make transportion accessible to farmers.

He was speaking on the sidelines of the 37th farmers’ day celebration at Adukrom-Akuapem in the Eastern region.

It was under the theme ” Planting for Food and Jobs: Consolidating For systems in Ghana”.

“Okere is having its share of the road construction. This will open up the markets to our farmers to send them to Koforidua, Nkurakan, Asenema, Somanya, Accra. The cassava dough produce for markets in Ashaiman, we’re going to produce more.

“With the construction of the roads which is evident for everybody to see, I am very very much hopeful that the future is bright for Okere and for that matter the whole country,” he stated.

Kwaku Koda emerged the overall best farmer. While expressing his appreciation and recognition, he urged the youth to venture into farming to reduce unemployment rate in the country.

“I want the youth to go into farming because it’s a good thing. We should know that government cannot employ all of us.

Mr. Koda also pleaded with government to take a second look at the distribution of fertilisers to farmers.

He said the delay is affecting their businesses.

The district recognised and awarded many farmers in categories of best youth farmer, best physically challenged farmer, and others.

DISCLAIMER: The Views, Comments, Opinions, Contributions and Statements made by Readers and Contributors on this platform do not necessarily represent the views or policy of Multimedia Group Limited.
Tags:
Adukrom-Akuapem
Dan Botwe
Eastern Region
Okere constituency