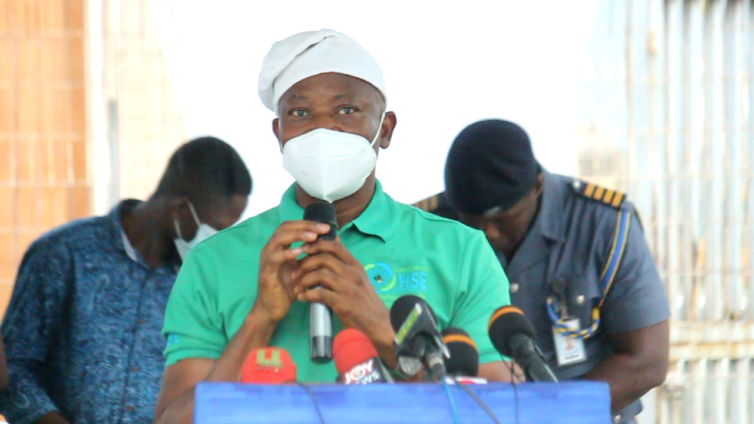 The Ghana Ports and Harbours Authority (GPHA) has indicated its commitment in contributing its quota to green and sustainable environment which supports life.

This is because it considers green environment as one of the surest ways of mitigating the severe impact of global warming, and help control global warming which is explained as the rise in the earth’s temperature due to activities that release pollutants including carbon dioxide, methane among other gases into the atmosphere.

The authority’s approach flows seamlessly into the greening agenda of the country with the pledge to plant 1000 seedlings.

Director General of GPHA, Michael Luguje, said this decision has become even more relevant to help tackle the ever-threatening phenomenon.

Mr. Luguje was speaking at GPHA’s Health and Safety Environment Day on the theme; One earth, One life which also coincided with Green Ghana Day as well as World Environment Day in Tema.

“We need trees for shade and also to help us contain global warming and its negative effects.1000 trees are scheduled to be planted within the main harbour area,” he said.

According to him, a similar project is being planned for Takoradi port.

GPHA has partnered Coastal Conservative Organization; a non-governmental organization to help in planting and nurturing of the seedlings.

Mr. Luguje used the opportunity to commend government for the Green Ghana initiative and said GPHA was proud to be associated with it.

Deputy Transport Minister, Frederick Obeng Adom, was happy the project was in sync with government’s Green Ghana project which promotes and encourages nationwide planting of trees for afforestation purposes.

According to him, government in 2022 is targeting to plant 20 million trees.

“This year, the target is plant 20 million trees. Deliberate efforts must be made to ensure that next year when we gather here we can say that 19 million trees survived”

“Government rallied people in the 2021 Green Ghana Project which saw planting of some seven million trees, despite initial target of five million. Out of the number, 6.3 million trees survived,” he stated.

For the Deputy Minister, dealing with the impact of climate change has become the responsibility of both organisations and countries.

He appealed to all to get involved in greening Ghana.

Although rain had a better part of the programme, it however did not deter enthusiastic GPHA staff, invited guests and other stakeholders from planting the symbolic seedlings as GPHA readily provided raincoats.

The rain was considered a good omen which ushered the seedlings into their new environment where they will grow into trees to serve the main port enclave.

Stakeholders including security agencies, importers and exporters and other players in the port community were present to support the initiative.