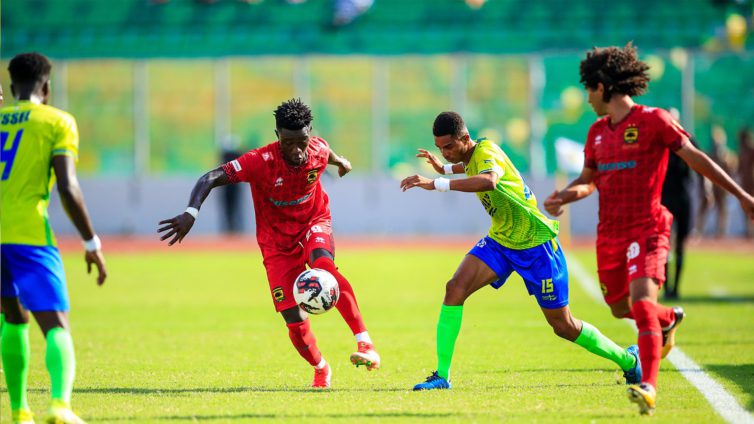 Kumasi Asante Kotoko left it late once again in the second week of the Ghana Premier League to beat Bechem United on their return to the Baba Yara Stadium on Sunday.

New coach Prosper Narteh Ogum and the players were officially introduced to the fans who were in joyful mood seeing their team in action for the first time in about 20 months.

Late goals from Ismail Abdul Ganiyu and Samuel Boateng propelled Kotoko to a 2-0 victory against a tough opposition.

Head coach, Prosper Narteh Ogum made no changes to the starting lineup which defeated Dreams FC in the opening weekend of the 2021/22 Ghana Premier League despite the heroics of Isaac Oppong on the day.

The home side looked sharper in the early stages of the game as they were hoping to give the fans an early present at the Baba Yara Stadium but their efforts did very little to unsettle the Bechem defence in the opening 45 minutes of the game.

Kotoko were forced into a first-half substitution before the break after Patrick Asmah picked up an injury and was replaced by Imoro Ibrahim.

Six minutes into the second period of the game, Narteh Ogum called on his bench again with two quick substitutions with Richard Boadu and Isaac Oppong coming on for Stephen Amankona and Joseph Amoako respectvely.

Oppong was once again the difference for Kotoko, as he was fouled in the penalty box in the 84th to earn a spot-kick for the Kumasi-based club. Ganiyu stepped up to convert the resulting penalty to give Kotoko the lead.

In the dying embers of the game, Samuel Boateng wrapped things up and put the game beyond the reach of Bechem United, making it 2-0.

The result sends Kotoko to the top of the league table after two games played. They face newly promoted side Bibiani Gold Stars in their next game in the top-flight.