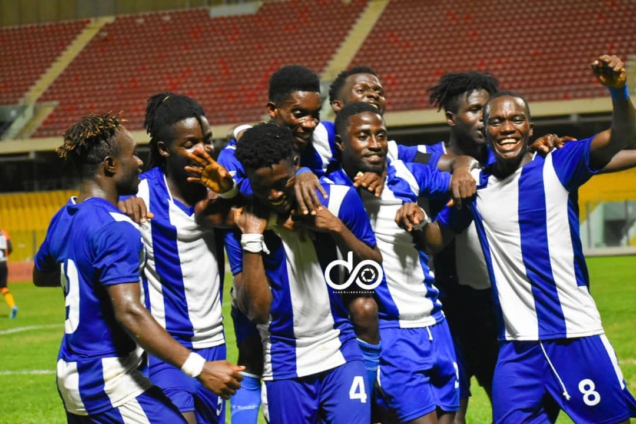 After the game, coach of Legon Cities, Goran Barjaktarević, was asked about positives from the game.

His response was straightforward and blunt. He said: “Nothing.”

The truth is, when your team is battered 3-0, it is difficult to pick up any positives and it was no different from Legon Cities on Friday night.

The stage was set, a Greater Accra derby between two sides who shared many similarities prior to the game.

Both sides were winless in their first three games last season and started the new season on a similar tangent picking up a point each on matchday one.

Olympics got a crucial equaliser against Medeama at Tarkwa as Legon Cities also came from behind to draw with Berekum Chelsea at home.

A tie between these two Accra-based clubs was an opportunity for one of them to pick up their first win of the season.

An opportunity that Olympics looked like they wanted more. The Oly Dade boys showed more intensity and hunger as they pressed Legon Cities in the early minutes of the game.

As a result, Annor Walker’s men dictated the tempo of the game and dominated the ball moving the ball around calmly.

At the end of the first half, Olympics could have been three or four goals up. New singing, Abdul Manaf Mudasiru had three clear cut chances to put his side in front but failed to put any of them on target.

Captain Maxwell Abbey Quaye, Gladson Awako and Samuel Abbey all had opportunities to score the first goal of the night but failed to convert.

With seconds to the end of the first half, Mudasiru was brought down at the edge of the penalty box. Awako converted the resulting free-kick with the help of a deflection to give Olympics the lead.

It was a half to forget for Legon Cities as they mustered a single shot on target and looked very disjointed.

The second half was more or less a carbon copy of the first half as Olympics kept dictating the play.

The Wonder boys were rewarded after Samuel Abbey was brought down in the box. Captain, Maxwell Quaye stepped and doubled his side’s lead.

Barjaktarević responded by making three changes as Legon Cities looked sharper and forced the issue. However, as the Royals committed more men forward, Samuel Abbey found space outside the penalty box and unleashed a powerful strike into the top corner.

3-0 it ended with Olympics outclassing, outwitting and outplaying Legon Cities at the Accra Sports stadium.

For the first time in a long while, Olympics look like a team that have a clear identity and play with so much intensity. Throughout pre-season, coach Walker was emphatic about his side finishing in the top five. An expectation that raised eye brows, but results such as these might see a lot more brows lowering.

The Wonder boys signed 11 players over the transfer window and the new players have easily assimilated into the squad according to head coach Annor Walker.

“It’s all about hardwork, the boys have also been taking instructions from me. Whatever I preach, they put it into practice. I am like a father to them and I have a father-son relationship with my players. When they deserve scolding, I scold them. In the end, you can see that the boys play for me on the pitch.”

Five of the new signings started against Legon Cities and the team chemistry was evident as players kept combining in triangles all over the pitch.

The team have made a good start to the league and are currently top of the table on goal difference.

Up next for Olympics is a game against title favourites, Asante Kotoko and Walker admitted that he is taking one game at a time.

“I had only Medeama in mind when I faced them. When I finished I moved my focus to Legon Cities. Now we face Asante Kotoko and we will need to intensify how we play and work on my players so we will be ready for Kotoko.”

Olympics will encounter their litmus test when face Kotoko on Saturday, November 28.