This is set to be the biggest clash among the match-day seven games that will be played this weekend.

League leaders Ashanti Gold face a very defining moment in the season which will definitely see their title credentials handed a major test.

The Miners had been on a clean sweep from the beginning of the season, but were brought down to earth when they faced Liberty Professionals at the Karl Reindorf Park in midweek.

Coach CK Akonnor’s side tasted their first defeat of the season against the Dansoman-based side and will be looking forward to a swift return to winning ways.

Standing in their way, though, are defending champions Aduana Stars who are equally desperate to get back in the title race after a poor start to the season.

The Fire Boys, despite sitting 10th on the league table, are perhaps the most in-form side in the Ghanaian topflight, having scored goals for fun in recent weeks.

The Dormaa-based side has scored a whopping 16 goals in their last three games in all competitions, including a 6-1 romping of Fosa Juniors in the CAF Confederations Cup.

Aduana recorded the biggest win in the Premier League this season after thumping Inter Allies 6-0 last week, before following that up with another 4-1 win over Eleven Wonders in midweek.

The ruthlessness of the defending champions is impressive but their poor away form means that Ashanti Gold have something to cheer about ahead of the game.

Aduana Stars are yet to win an away game this season – both domestically and in Africa – having lost on the road against WAFA and Es Setif, sandwiched by draw against Elmina Sharks. 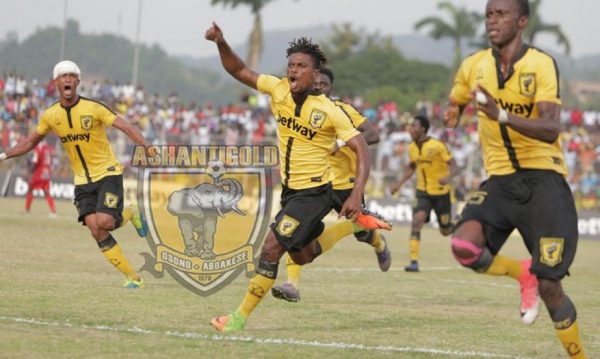 On the contrary, Ashanti Gold boast an impeccable home record having won all their games at the Len Clay stadium this season.

That, coupled with the fat that the Miners have already beaten giants Hearts of Oak and Kotoko, means Aduana must be at their best to emerge from the game with a meaningful result.

If you are close to Obuasi, then you can’t miss this game!