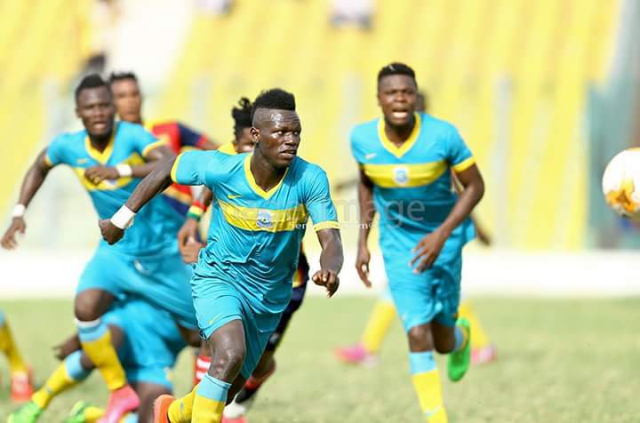 If you're around the Obuasi area, this evening kickoff should make for good entertainment.

StarTimes, the official league broadcaster, continue their roadshow by taking matchday games to chosen neutral venues to increase the number of live games to be beamed nationwide.

And it's why this game will be honoured at the Len Clay Stadium.

And now, to the game. Both teams boast identical records after four rounds of matches, with Elmina Sharks lying 11th; Wa All Stars follow suit in 12th.

The Sharks, though, have a game in hand and could move to the top of the table if they can win Saturday’s clash as well as their impending outstanding game. On another day, a visit to the Wa Park would be regarded as a daunting task, however, All Stars have not been impressive at home in the current campaign. Also, they will be playing home from away at the Len Clay stadium due to said broadcast schedule put out by StarTimes.

In three home games, the Northern Blues have won just once – with the other two ending in a draw and a loss. However, the club should be targeting a win against a Sharks side that have also proven not to be good travelers.

Forget not also that All Stars have sacked their coach a week ago, the first in the division to do so. How will this affect them?

As for Sharks, the last time they actually won an away game in the GPL was in October 2017 when they defeated the now-relegated Tema Youth 0-2 at the Tema sports stadium.

Such a poor away record means that Wa All Stars will start this fixture as favourites despite their own struggles.

It is a game that is expected to be very tight, especially with both clubs currently out of the relegation zone only by virtue of having a better goal difference ahead of their other rivals at the bottom of the table.

The last time the Sharks visited the Wa Park they managed to grab a hard-fought 1-1 draw, before coasting to a 2-0 win over the Northern side in the reverse fixture at the Papa Kwesi Nduom stadium.

Per the stats, Wa All Stars have always found it difficult when playing against Elmina Sharks, having never tasted victory over the Elmina-based club.

However, Saturday’s game could take a different twist as the Royal Blues are in dire need of points to stay clear of the relegation zone.

But they will have to do it the hard way against a Sharks side that they have never beaten in the GPL. Will the narrative change? Saturday will decide!

The game will be televised on StarTimes. Kickoff 6pm, Saturday.

ALSO READ: The GPL's three most intriguing ties this weekend