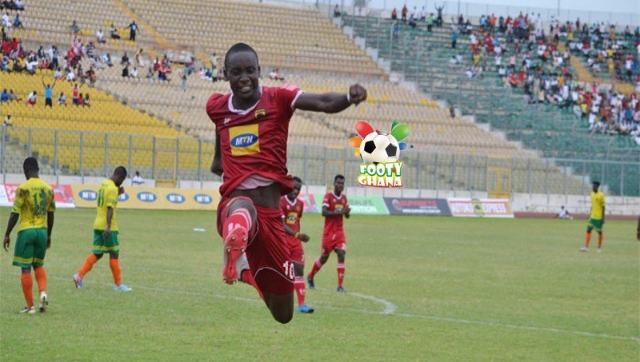 Asante Kotoko put up a spirited display to beat Ebusua Dwarfs by 3-0 in their match day 11 home fixture at the Baba Yara Stadium on Sunday.

The Porcupines who made a lot of alterations in their squad managed to comfortably dispatch their opponents. Coach Michael Osei paired Ahmed Adams and Ohene Brenya in the absence of suspended Edwin Tuffour Frimpong and Evans Quao, as well as injured Osei Agyemang.

Atta Kusi played in the stead of Amos Frimpong [who is on international assignment with the local Black Stars in Japan] at right back with Eric Donkor, captain of the day reverting to left back. The only change to the midfield and attack that started the Super Clash was Halipha Sedogo who was unimpressive at left wing.

The visitors had two ex-Hearts of Oak players – new signing Gilbert Fiamenyo who came from the bench and Romeo Agban who started for Dwarfs with Agya Fuseini who also signed for the side this week also starting from the bench.

Kotoko started the game on a high note with Dauda Mohammed’s effort ricocheting off the crossbar and bouncing of the line from an Atta Kusi delivery. The porcupines dictated the pace of the game and created more chances which yielded them the opener through Dauda Mohammed after 17 minutes. The striker lobbed past Frank Andoh after latching onto a delicate pass from Stephen Nyarko.

Kotoko seized control of the game with good passing anchored by Nyarko in midfield before the half hour mark but Dwarfs began warming themselves into the game with a number of dangerous attacks which were dealt with by Ohene Brenya and Ahmed Adams in defence.

Kotoko took control of the game after Dwarfs’ 10-minute dominance and consolidated their lead on the stroke of halftime. Frank Sarfo Gyamfi outwitted his marker and shot into the left bottom corner from a Nyarko long ball.

The second half started brilliantly as the hosts created more opportunities but highly wasteful. A number of sitters were missed by Halipha Sedego, Obed Owusu, Dauda Mohammed and Sarfo Gyamfi. Sedogo shot wide from eight yards as a yawning net awaited the ball from Dauda’s low cross four minutes into the second period.

Obed Owusu blasted over the post five minutes after the Burkinabe’s miss with only the goalkeeper to beat. Dauda Mohammed and Sarfo Gyamfi failed to score on a one-on-one situation just after the hour mark, both fluffing their opportunities due to poor first touches.

Dwarfs brought on Gilbert Fiamenyo and Stephen Bentil for Romeo Agban and Isaac Kwain in a double switch and the former Hearts of Oak striker energized the attack of Coach J.E Sarpong’s side and were rewarded with a penalty in the 73rd minute. Ohene Brenya left a high foot on Samuel Quayson after a clearance in the penalty box. Fiamenyo stepped up but his kick was saved by Sowah in post for Kotoko.

The visitors started feeling the heat from the home side when Kojo Poku and Michael Yeboah came on for Theophilus Nyame and Halipha Sedego, though Yeboah was as ineffective as Sedogo who started.

With just eight minutes to end proceedings, a beautiful array of interlaced passing between Donkor, Adams and Poku sent a ball to the goal area which man of the match, Dauda tapped into the net after his initial effort was parried by Akwesi Acheampong who came on to replace injured Frank Andoh in post.

The home fans exclaimed for Stephen Oduro to come on after the third goal and in a magical euphoria at the stadium, the legend was cheered on to replace Sarfo Gyamfi. There was no further action but the crafty passing feet of Oduro excited fans until the final whistle after two minutes of added time.

The win sends the porcupines up the league log to fifth with 17 points in the ongoing 2015/16 Ghana Premier League. 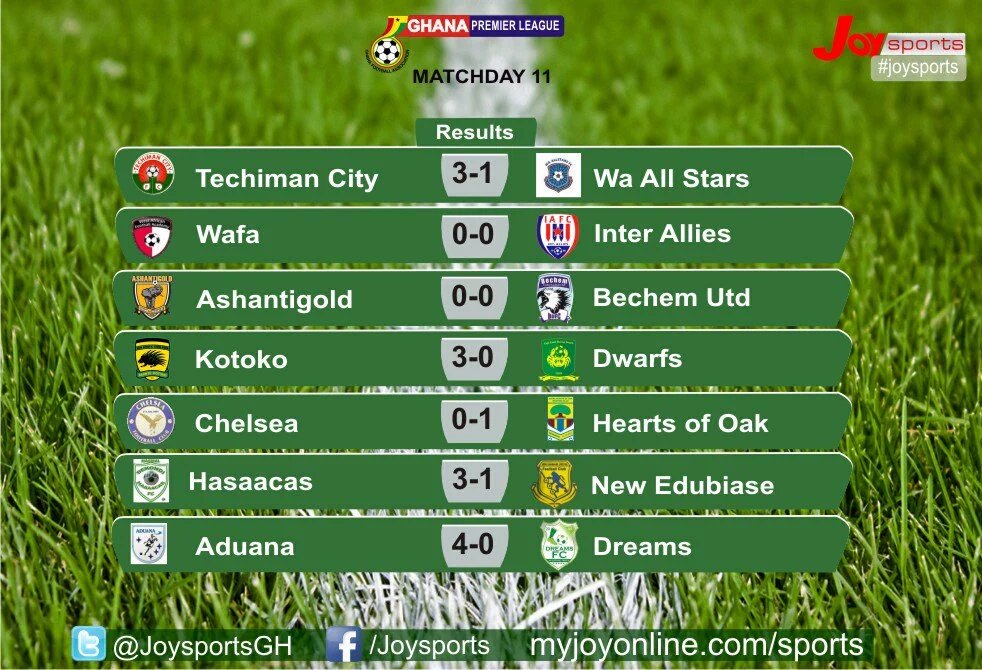