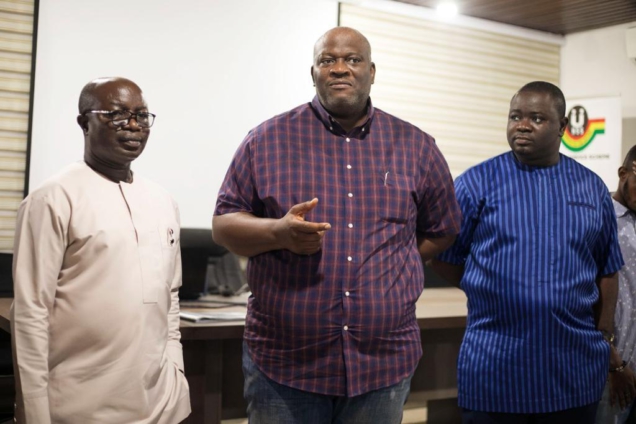 The Greater Accra Regional Minister has commended the visionary and dynamic leadership injected into the National Service Scheme (NSS) by its new Executive Director, Osei Assibey Antwi, aimed at reducing the rate of graduate unemployment in the country.

Henry Quartey said his decision to shift the focus of the scheme from deployment to employment and skill provision was in tandem with President Akufo-Addo’s objective of providing the youth with skills that would turn them into global industrial leaders.

Dubbed ‘Deployment for Employment’, the new vision being spearheaded by Mr Assibey Antwi seeks to develop the competencies of the National Service Personnel to enable them to acquire the right skills to be self-employed or gainfully employed by any organisation after their service.

Since the assumption of office, the Scheme under Osei Assibey Antwi has introduced new modules which include Impact Hub, which is designed to train NSPs on how to develop computer Software and Applications; NSS-GTA Support Module, meant to promote and provide assistance to the Ghanaian tourism industry; NSS Construction and Estate Housing module, which seeks to embark on the construction of low-cost homes for teachers, classrooms blocks, pavements etc.

Mr Quartey gave the commendation when he paid a working visit to the NSS Headquarters in Accra to acquaint himself with the oper. Assibey Antwi.

Mr Quartey indicated that as key stakeholders in national development, the Greater Accra Region has considered singing a Memorandum of Understanding (MOU) with the NSS on how both parties can ensure that the region’s flagship programme, ‘Make Accra Work Again’ Campaign achieve its desired success.

He was full of praise for Mr Assibey Antwi for the immense support the NSS provided the Greater Accra Region during the Operation Clean Your Frontage Campaign where more than 15,000 National Service Personnel were deployed to assist in sensitizing the general public on the need to maintain clean surroundings.

The Regional Minister further praised the foresight of President Nana Addo Dankwa Akufo-Addo for appointing such an experienced and hardworking public servant to lead such a state institution charged with the responsibility of formulating policies and structures for the National Service program.

He appealed to funding agencies and sector ministers to support NSS to execute all the laudable initiatives being undertaken to increase employment opportunities for the teeming youth in the country.

For his part, Assibey Antwi pledged the support of NSS to the RCC to make Accra work again and assured the minister of the preparedness of the Scheme to collaborate with him to achieve the President’s vision of making Accra the cleanest city in Africa.

Mr Assibey Antwi announced that as part of the numerous efforts taken to enhance the employable skills of the personnel, the Scheme is set to roll out a project with the Institute of Public Relations (IPR) to train and certify service personnel as Public Relations professionals to be employed by MMDAs or work as freelancers.

This, he explained, will create over 2500 jobs across the country when it is fully implemented by the end of 2022.

Below are more pictures.