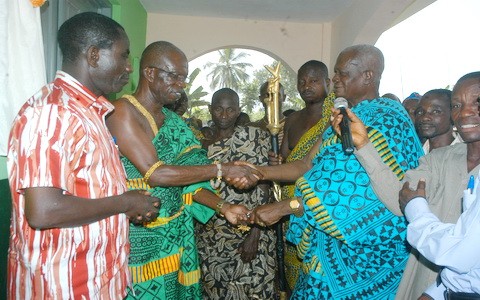 The Management of Ghana Rubber Estates Limited GREL, has commissioned a two classroom Kindergaten block with office space, storeroom and a KVIP toilet facility at the cost of 113,000 Ghana cedis for the Adiewoso rural community in the Tarkwa-Nsuem Municipality.

The commissioning brings to fourteen the number of schools GREL has constructed within its catchment area since 2005.

The community is one of 84 in the company’s operational area, is one of the many deprived villages which had a very poor structure serving as a Kindergaten block although it’s primary and JHS blocks were in relatively good condition.

The Headmaster of the Adiewoso M/A Basic School, John Vasco Arthur who was overwhelmed by the gesture said the poor nature of the Kindergaten structure discouraged parents from bringing their wards to the school and was optimistic the situation would improve.

He was however worried about the reliance on just one pupil teacher provided by the community for the Kindergaten due to the unavailability of trained teachers.

He said the Adiewoso M/A Basic School was faced with many challenges because the school is far away from the District capital Tarkwa, and was thus grateful to the company for intervening to lessen their plight.

The library, which will also accommodate an ICT centre had in it, four water closets and two urinals. It was built at the cost of 103,000 cedis and is the first Library to be constructed for any community in the company’s operational area.

The chief of the community Nana Asaah Kofi III, was full of joy and commended GREL for responding to the community’s request to put up the modern Library complex.

He appealed to residents of the community to contribute towards the growth of the company, which also employs about 3,500 people from the 84 communities.

The Paramount Chief of Nsein Traditional Area, Awulae Agyefi Kwame II, who doubles as the Chairman of the Association of Chiefs on whose Lands GREL Operates (ACLANGO), urged residents of the seven traditional areas, particularly the youth to use dialogue when they have disagreements with the company over land rather than resorting to violence.

GREL’s Corporate Affairs Manager, Mr. Joseph Gabrah, who later commissioned a 10-seater KVIP toilet facility for Abura Akyempim village and a community centre for Apemenim Number 2, both in the Ahanta West District, told Maxx News, such development projects mean a lot to the communities and the company. Both projects he said cost the company130, 000 cedis.
He said GREL remains committed to improving the lives of residents in its catchment area and is not discouraged by the activities of a few people who often agitate over lands to the extent of causing damage to their property.

He explained that the company was more committed to education hence the huge investment in that sector which has seen the building of 14 basic schools since 2005, and 91 scholarships for SHS students distributed fairly among the seven traditional areas.

He added that the company has also awarded scholarships to two SHS beneficiaries who excelled to further their tertiary education, and has since 2006 paid for the organisation of vacation classes for basic schools in the catchment area.