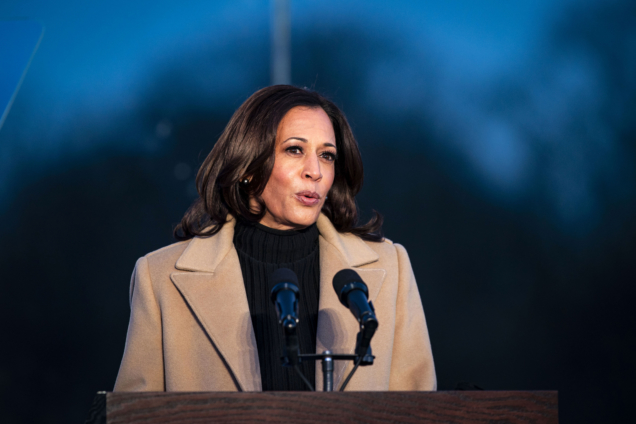 U.S. Vice President-elect Kamala Harris speaks during a Covid-19 memorial to lives lost on the National Mall in Washington, D.C., U.S., on Tuesday, Jan. 19, 2021. President-elect Joe Biden arrived in Washington on the eve of his inauguration with the usual backdrop of celebrations and political comity replaced by a military lockdown. Photographer: Al Drago/Bloomberg via Getty Images

Kamala Harris will be sworn in today as the next vice president of the United States by Supreme Court Justice Sonia Sotomayor, according to a Harris aide.

Harris will make history as the first female, first Black and first South Asian vice president, and she will be sworn in by the first Hispanic and third female justice in US Supreme Court history. Sotomayor was nominated by President Barack Obama to the high court and has served since 2009.

The vice president-elect will take her oath of office using two Bibles; one that previously belonged to a former neighbor and family friend of Harris’, Regina Shelton, and another that belonged to Thurgood Marshall, the first African American to serve on the Supreme Court, the aide said.

ABC News was first to report the Bibles and that Sotomayor would swear Harris in.

Harris has described Shelton as a second mother to her, and she and her sister Maya often visited Shelton’s house after school while their mother, the late Shyamala Gopalan, was still at work as a breast cancer researcher. Shelton lived two doors down from Harris’ home. Harris used Shelton’s Bible to take the oath of office to be attorney general of California and later to become a United States senator.

“In-office and into the fight, I carry Mrs. Shelton with me always,” Harris wrote in an op-ed for Bustle about Shelton titled, “Without This Woman, I Wouldn’t Be The Senator I Am Today.”

Harris has often said that Marshall was one of the inspirations for her legal career and has described him as a “childhood hero of mine.”

The vice president-elect said in a video posted to Twitter in July, “Thurgood Marshall and the work that he did is … really one of the main reasons I wanted to be a lawyer. Thurgood was a fighter, he was a boxer in the courtroom.”

DISCLAIMER: The Views, Comments, Opinions, Contributions and Statements made by Readers and Contributors on this platform do not necessarily represent the views or policy of Multimedia Group Limited.
Tags:
Inauguration
Kamala Harris
Vice President