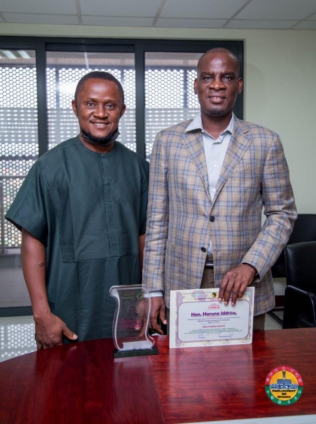 The Minority Leader, Haruna Iddrisu, has been awarded the Africa Patriotic Legislator of the year by the League of African Development Students.

The group, an umbrella body for all democratic Students Unions in Africa started since 1985 at the Bayero University, Kano (Nigeria) with the objectives of sensitising her members on the Development Best Practices is now present in over 25 countries of Africa.

A delegation of 12 outstanding students drawn from various African countries were in Accra to present the award to the minority leader.

Born in 1970 at Tamale, Ghana Haruna Iddrisu studied at the University of Ghana between 1993 and 1997 where he obtained B.A. (Hons) in Sociology.

He was active in student politics and was the President of the National Union of Ghana Students during his final year.

Iddrisu is also a barrister and has been a member of the Ghana Bar Association since 2002. After being a student leader for years in his tertiary education period, Iddrisu transitioned into mainstream national politics and rose to become the National Youth Organiser for the National Democratic Congress in 2002.

He held that position for eight years even whilst Minister of Communications until stepping down in 2010 and not seeking reelection. The Tamale South Member of Parliament has represented the constituency since its creation in 2004.

Even though his party lost the Presidential Elections, Haruna retained his seat in the 2016 Elections and was selected to lead the minority caucus as the Minority Leader of the 7th Parliament of the 4th Republic in Ghana.

He currently leads the minority NDC side in parliament, both parties the NDC and the governing NPP have 137 seats in the house.

DISCLAIMER: The Views, Comments, Opinions, Contributions and Statements made by Readers and Contributors on this platform do not necessarily represent the views or policy of Multimedia Group Limited.
Tags:
Africa Patriotic Legislator award
Haruna Iddrisu
League of African Development Students (LEADS)
Minority Leader