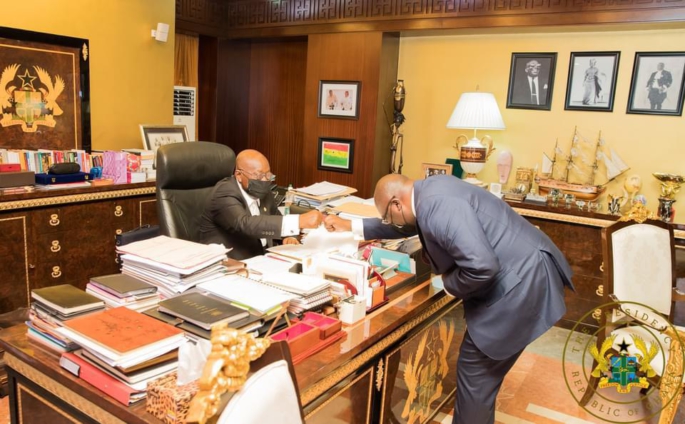 I bring you warmth greetings from the well-meaning lovers of our envious tradition whose interest, like yours, resonates with our forebears to jealously guard and preserve the sterling leadership of your government.

Sir, in spite of the excellent performance in the first term of your government, it goes without saying that in the latter part of the first term we experienced some difficult times which invariably is jostling the second term of your administration. The complexity of the unexpected crises of COVID-19 and its related effects has to a large extent undeniably derailed the efforts to prosecute our awe-inspiring development agenda.

As the world over inches to find a lasting solution to this economy-wrecking disaster, I and the millions of our party folks have so much hope in you and believe in your charming leadership to surmount this pandemic, recover quickly, and work towards putting our nation back onto the path of progress and prosperity.

As a government we are also bedeviled and faced with a near even Parliament which sets a grueling stage for potential paralysis in government business. For the first time, a member of the opposition party is the Speaker of a seemingly hung parliament. We are definitely not in “normal times”.

Unfortunately, Mr. President, the “scourge” of dealing with this “abnormal” situation would travel the full length of the second term of your government. It therefore behoves on us as a government to rise up to the occasion, how thorny it may be.

Mr. President, with all these cankers rearing its head in the second term of this government, we, the party people, are firmly behind you in realizing your commitment of handing over your government to another NPP-led administration, a legacy you have promised to ensure it is done.

As I write this letter, I recall one of the many meetings you had with party leaders in Kumasi last year during the campaign period where you emphatically stated that the legacy you want to leave for the party is to one, win the December 2020 general elections and two, to handover to an NPP government. We are with you and Insha Allah it shall come to pass!

Sir, despite this laudable legacy you wish to bequeath to the party, there are some worrying advances, in defiance to your course, by persons in your government and elements within the party that have the tendency to disrupt the gains of this government and frustrate your avowed ambition to “break the eight” going into the 2024 general elections.

Mr. President, although the party leadership has, rather in a laidback, cautioned interested persons seeking to succeed you to desist from activities that project their parochial interest, the wobbly warning has fallen on deaf ears.

Elements purporting to be advancing the interest of the Vice President, Alhaji Dr. Mahamudu Bawumia, whom I expect to know better, had taken to the streets with posters and other paraphernalia projecting and splashing any available space with images of Dr. Bawumia.

This detestable and reprehensible act caused the Vice President through his spokesperson, Dr. Gideon Boako to issue a statement on March 24, 2021 where he conceded that “The Office of the Vice President has taken notice of the proliferation of posters around the country apparently promoting H. E Dr. Mahamudu Bawumia as the candidate of the NPP for the 2024 elections.” The statement further stressed that “For the record, the Vice President has not given his consent to these and other associated activities”.

Mr. President, sadly and pitifully the Vice President, who is the beneficiary of this abhorrent act, failed (if not intentionally) in his statement to sternly ask his supporters to desist from parading the streets with his paraphernalia and posters. I was quite disappointed and rightly so, pitiable to say the least. Given such a fine opportunity, the Vice President failed to call his miscreants to order.

Mr. President, in May 2005, when you were faced with such a situation you showed maturity and stood up to the occasion as a patriot and a true leader worthy of emulation. You showed outright Leadership! You showed Patriotism! Same cannot be said about Dr. Bawumia.

Permit me Mr. President, to reproduce a portion of your advice to the party folks and contemporaries in your letter to the late Victor Newman, when at the time (in May, 2005) you harbored the ambition to succeed President Kufuor. You stated without mincing words that “The duty of those of us on board in these circumstances is clear – we all have to rally around the captain and assist him to steer the ship to shore. Unity, discipline and loyalty have to be our watchwords if we are not all to go down with the ship. It is time for all hands on deck so that we can steady the ship and bring it home safely to port.”

The letter further stated that “The most effective foundation for a successful tilt at the presidency by an NPP candidate in 2008 will be the good performance of the Kufuor government between now and then, lf the government delivers on its promise of improving the social and economic conditions of the mass of our people, which it can, the work of the candidate would be considerably lightened… That then, is where I want to put my energies for now – helping build a Kufuor legacy for 2008. It should be the aim of all of us.” This is Leadership! This is a mark of a True Patriot!

Mr. President, the Vice President and his team of loyalist do not seem to recognize that helping build an Akufo-Addo legacy is the surest way to score, God willing, a hat-trick of victories in December 2024 to allow us the opportunity to continue with the building of our project in order to bring prosperity, freedom and dignity to the lives of our people.

Mr. President, very recently, loyalists of Dr. Bawumia have been spotted in videos, which have been widely circulated on social media and other platforms, wearing Bawumia branded T-Shirts in a well-organized procession around parts of the country chanting and soliciting support for Dr. Bawumia. In one of the many videos, the organized group wearing Dr. Bawumia paraphernalia paid a visit to the residence of the respected Chief Imam. The leader of the group is on record touting reasons why Dr. Bawumia must succeed you.

These happenings amongst others are so repulsive and unbecoming of a person of the stature of the Vice President. Dr. Bawumia cannot pretend to be unaware of these unfortunate situations. He seems to be too desperate!

Your Excellency, please call the Vice President to order since such inappropriate actions have the predisposition to blur the focus of your government and cause problems for this party. The late Vice President, Alhaji Aliu Mahama, displayed a high level of maturity when he intended to succeed President Kufuor. He was focused on delivering as a member of the government.

We must remain united and focused to ensure that the Akufo-Addo legacy is realized. We trust in your statesmanship and ability to nib this alien attitude immediately as if care is not taken would “destabilize” the government and destroy our party.

I am most grateful, Mr. President, for your attention.

Together we shall break the eight jinx!

DISCLAIMER: The Views, Comments, Opinions, Contributions and Statements made by Readers and Contributors on this platform do not necessarily represent the views or policy of Multimedia Group Limited.
Tags:
Haruna Nuako
Mahamudu Bawumia