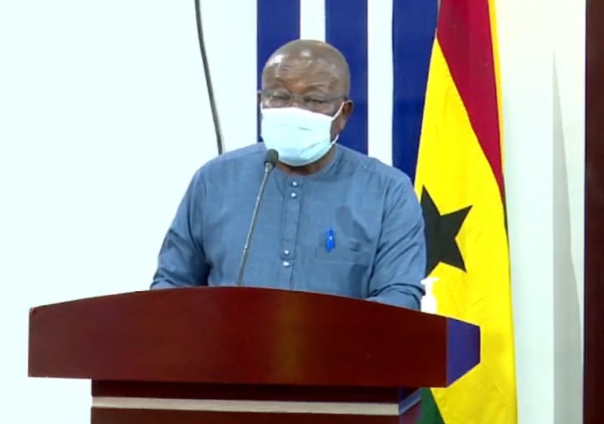 The Minister of Health, Kwaku Agyeman-Manu says contrary to claims by the Minority in Parliament, the government is committed to completing the health projects it cut sod for in 2020.

According to him, the construction of the projects has been delayed due to some disruptions as a result of the Covid-19 pandemic.

Mr Agyeman-Manu stated that despite the fact that Covid-19 derailed efforts to meet scheduled timelines, for many of the projects, work has begun.

“Let me state that it looks like very soon, very quickly, all of us Ghanaians are forgetting that the world was hit by a pandemic which disrupted normal economic activities. The 12 different hospitals to be done by one contractor from Europe, we did sod cutting for all of these in October and November.”

“By December, Covid second wave had hit Europe and its attendant disruptions. People were not going to work, flight disruptions, cancellations, restrictions, quarantine and certain demands at certain airports wouldn’t allow contractors and engineers who are coming to engage us, to begin work for these projects to be done,” the Health Minister said at a press conference on Wednesday.

Mr Agyeman-Manu added that at the beginning of the year, Ghana was hit by another wave, which once again pushed back work that was to be done on the projects.

The Health Minister said that the government would not have cut sod for the projects, if there was no intention or the finance to complete them.

His comment comes after the Minority in Parliament questioned President Akufo-Addo’s commitment to see Agenda 111 through, following his failure to complete the 22 district hospitals he promised during the peak of the Covid-19 pandemic.

A spokesperson for former President John Dramani Mahama, Felix Ofosu Kwakye, called the project a “knee-jerk” reaction to the NDC government’s achievement in the health sector.

He also questioned the availability of funding to complete the project, especially since district hospitals that sods were cut for, had not been completed.

The Minority also accused the government of abandoning some projects in the health sector started by the NDC government.

However, Mr Agyeman-Manu said that no hospital project had been abandoned since the NPP took over power in 2017.

He added that all the projects government cut sod for in 2020, have cabinet and parliamentary approval and the go-ahead from the Finance Ministry.

Mr Agyeman-Manu said that the contractors will begin work within the next two weeks.

“Even now preliminary works are ongoing in these places. Some of the projects we did sod cutting for, we wouldn’t deliberately do them if there is no money,” he added.

DISCLAIMER: The Views, Comments, Opinions, Contributions and Statements made by Readers and Contributors on this platform do not necessarily represent the views or policy of Multimedia Group Limited.
Tags:
Covid-19
Health Minister
Kwaku Agyeman-Manu