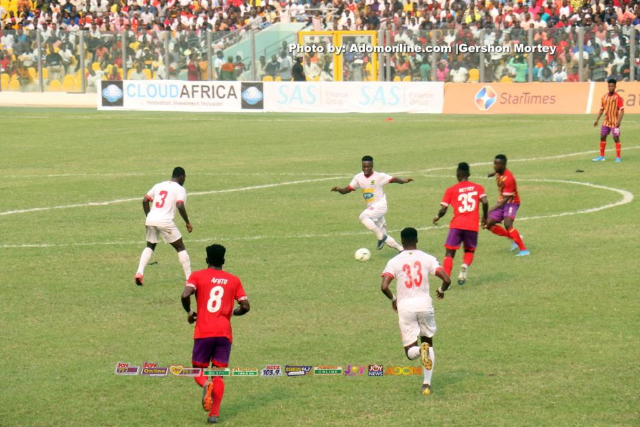 Asante Kotoko clinched their fourth win of the Ghana Premier League season against their arch-rivals Hearts of Oak at the Accra Sports Stadium.

Justice Blay put the visitors ahead in the first half but the Phobians struck back in the second through Joseph Esso.

The Porcupines got a penalty after Mohammed Alhassan handled the ball in the box and Naby Keita calmly converted from the spot in the dying minutes of the game.

Here are five things we learned from the match:

Matthew Cudjoe is worth the hype

The 16-year-old made his mark against Ebusua Dwarfs on matchday five, scoring a goal in the final minutes of the game.

The youngster impressed once again in this tie with some silky moves, composure and dribbling ability despite coming on as a second-half substitute.

The pressure barely got to him and he was rewarded for his efforts with after his strike hit the arm of Alhassan winning the penalty for Kotoko which Naby Keita calmly converted.

It is no surprise that he has been booked for a trial at Bayern Munich next month. He is one that the national youth team coaches should consider for future tournaments.

Hearts of Oak dominated in possession and Joseph Esso was at the centre of it all.

The forward pulled the strings and did everything right from the start of the whistle.

Esso was rewarded for his efforts with a goal after the hour mark, nodding it in after the initial header from his teammate came off the post.

After the Hearts marksman was subbed off due to injury, the Phobians’ tempo dropped and they ended up losing the game.

Maxwell Konadu came into the tie on the back of an unbeaten run against Hearts of Oak and has maintained it.

The Porcupines are now back in the title race and Konadu managed to silence his critics.

He is well in sight of clinching the coveted Ghana Premier League trophy for the second time in his career as Kotoko coach.

The head-to-head record were not in the favour of the hosts going into Sunday’s fixture.

Hearts had already lost to their arch-rivals five times in their last ten meetings at the Accra Sports stadium whilst managing just two victories.

The record has now gone up to six wins for the visitors in 11 encounters.

The Phobians are also under a strange curse. Anytime Hearts win a match before meeting Kotoko in Accra, the Porcupines come out with the victory and it happened on 10 occasions before today.

The Super Clash between Hearts of Oak and Asante Kotoko usually tends to pull a large section of the supporters to the stadium but these fans decided to take it one step further.

At 7:30 GMT, there was already a long queue outside the Accra Sports Stadium though the match was scheduled to start at 15:00 GMT.

The atmosphere during the game was electric, signifying the eagerness of the fans towards this tie and Ghana football as a whole.