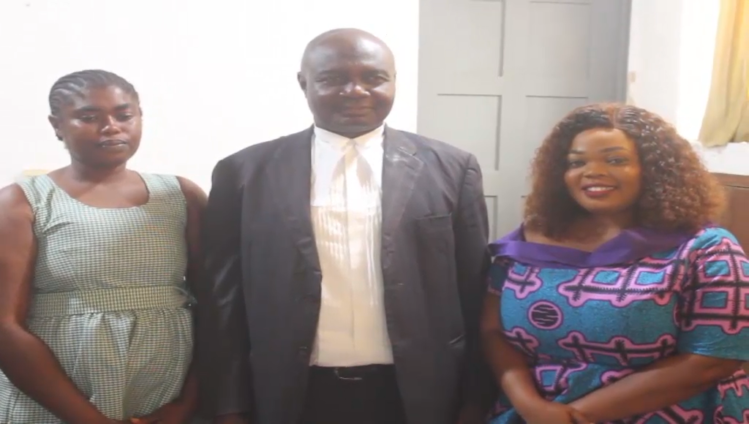 A 26-year-old mother of two children in Cape Coast has been given a major support by a Cape Coast High Court judge to return to school.

26-year-old, Leedy, born to an Ivorian father and a Ghanaian mother dropped out of school after giving birth to two children.

The father of the two children subsequently abandoned Leedy and the two kids. She was left at the mercy of people on the streets of Cape Coast.

Justice Kwasi Boakye who was touched by the desire of the 26-year-old to return to school and complete her Senior High School education opted to support her and ensure that her dreams are fulfilled.

Speaking to the JoyNews after handing over an amount of GHC2,000 to support Leedy Alorke, to enable her to return school, Justice Kwasi Boakye said part of his job on earth is to help the needy.

“I am ready to assist her.  I want her to become a responsible woman in the future, so that she will not be a burden on society.”

“I see this as part of my assignment on this earth. It doesn’t mean that I’m rich but at least, with the little that I have, I think it’s better I share with people who do not have, that’s the basic reason”, he added.

Justice Kwasi Boakye disclosed that this is not the first time he has extended such a gesture to a needy person. Justice Boakye asserted that when he was in Wa in the Upper West Region, he offered support to about 500 widows and there are about three ladies that he is still supporting.

“Being a social worker, I know a lot needs to be done, especially in Cape Coast. When they hit the age of 25 or older, they realize their mistakes. Leedy called through her Assemblyman and her readiness to go back to school drew me to her.”

Leedy expressed her appreciation to Justice Kwasi Boakye for supporting her ambition.

“I thank them for what they have done for me. I’m grateful and God bless them. With what they have done for me, I will never let them down. I will go to the school, and honour them. Things were very hard for me after I gave birth to my two children and the guy abandoned us due to some misunderstanding. I took loans for businesses but ran at a loss. I dropped out of school and now, I need some vocational skills. I was grateful when Aunt Gilda decided to help me”, amidst tears, this was how Leedy expressed her gratitude to Gilda Nyaniba and Justice Kwasi Boakye.