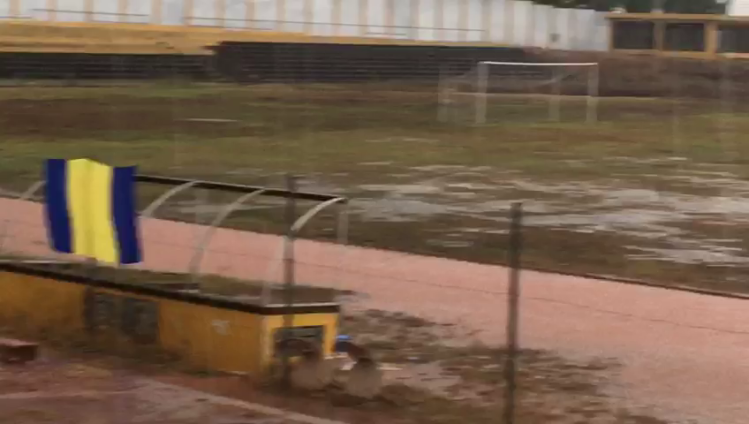 A preparation match between the Ghana Black Starlets and Home Stars FC was rained off after about 10 minutes of play at the Ho Sports Stadium.

Referee Rustum Senorgbe ended the match due to the severity of the rain and the waterlogged state of the pitch.

Sections of the deteriorated pitch could be best described as dams, as they got flooded with large volumes of water.

Spectators didn’t mince words subjecting sports authorities in the region to rebuke, expressing their disgust and disappointments in the authority for releasing the pitch for outdoor events at a fee.

“They will host all kinds of programmes here. Jamz, Crusades, just name them, the pitch was left in a bad state after the trade fair was held here.”

“The Regional Minister promised they will fix the stadium [after the Volta Trade and Investment Fair]”, lamented a fan.

“Regional Minister, this is a day of shame for Volta Region. And all the stakeholders, you are all quiet,” said Osei Foster, a sports presenter.

Some irate spectators who demanded a refund of the ticket fee locked the main gate and held hostage, some Management members of Home Stars FC.

They prevented them from leaving the stadium until their GHC5.00 each is refunded.

“This is where we enjoy football, but they have decided to use the park as a church auditorium, they have organised a series of programmes on this pitch but they have refused to repair it”, said a football enthusiast.

He further indicated that “the Regional Minister promised us, after the Fair, that they will do the park, but until now they have done nothing”.

The hold up degenerated into a fisticuff between the protestors and some spectators who attempted to force their way through the gate.

Calm was restored after about 5 minutes of a free for all fight.