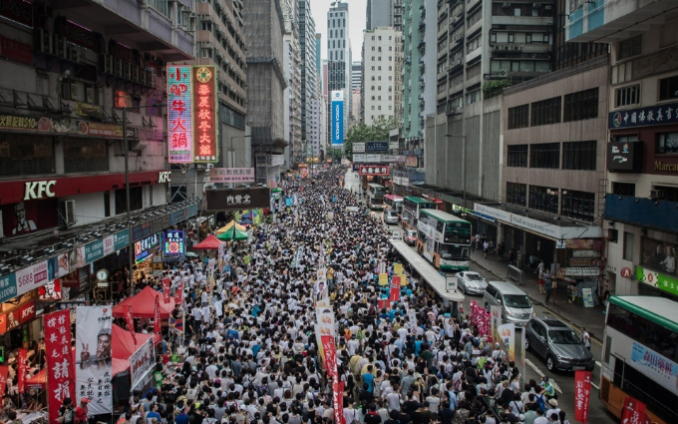 Hong Kong's Chief Executive CY Leung has said he will not resign amid calls from pro-democracy protesters for him to step down.

But he said his government was willing to hold talks with the protesters.

The protesters – angry at China's plan to vet candidates for polls in 2017, saying they want full democracy – have surrounded two key government buildings in the territory.

Mr Leung warned that they were breaking the law.

At a news conference shortly before the protesters' midnight deadline for his resignation expired, Mr Leung warned that attempts to move on or occupy government buildings would be met with a police response.

He said the protesters around government buildings had so far been "very rational and restrained", adding: "I hope they will continue to be like that."

He said the territory's top civil servant, chief secretary Carrie Lam, would open a dialogue with student leaders as soon as possible.

"Tonight, the Hong Kong Federation of Students issued an open letter asking for a meeting with the chief secretary, representing the Hong Kong government, to discuss one item – and this is the constitutional development of Hong Kong," Mr Leung told reporters.

"We have studied the letter in detail, and I'm now appointing the chief secretary to represent the Hong Kong government to meet with the representatives of the Hong Kong Federation of Students to discuss constitutional development matters."

He added: "I will not resign because I have to continue with the work for elections."

The protesters have massed outside the Office of the Chief Executive and the Central Government Complex.

Police had earlier warned protesters not to try to breach the police cordon protecting the buildings.

Police spokesman Steve Hui told reporters: "The police will not stand by and watch. We will decisively uphold the law."

Lord Patten, the last British governor of Hong Kong before it was handed over to China in 1997, told the BBC that establishing a genuine dialogue was the only way forward.

"It does make a huge amount of sense to try to get a dialogue going.

"And this time to try to ensure that those who are involved in talking about their own democratic future feel that it's not a sham, that it's not counterfeit, that it's a genuine discussion ending up with elections that people will regard as free and fair," he said.