Two people are in critical condition after another day of violent demonstrations in Hong Kong.

A protester was injured on Monday morning when he was shot at close range by a police officer.

He was the third person shot by police since the protests began 24 weeks ago.

Later on Monday a pro-Beijing supporter was doused in flammable liquid and set alight after arguing with protesters, who are demanding greater democracy and police accountability in Hong Kong.

The territory’s Chief Executive Carrie Lam, speaking at a news conference on Monday evening, called the demonstrators enemies of the people.

“If there’s still any wishful thinking that by escalating violence, the Hong Kong government will yield to pressure, to satisfy the so-called political demands, I’m making this statement clear and loud here: that will not happen,” she said.

There were clashes across Hong Kong on Monday between protesters and police, who fired rubber bullets and tear gas. At one point, tear gas was fired in the central business district – a rare occurrence during working hours on a weekday. 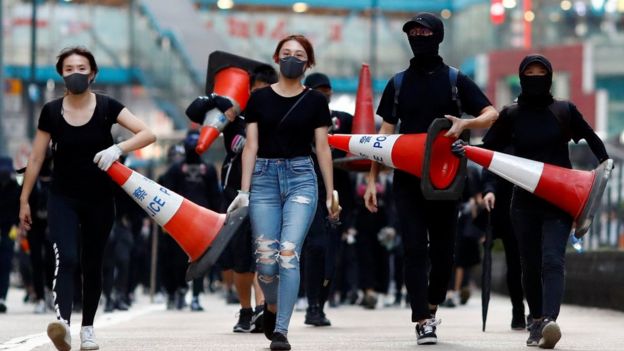 The violence also prompted a warning from a senior Chinese newspaper editor at a tabloid published by the state-owned People’s Daily.

Addressing Hong Kong police, Hu Xijin wrote: “You have the backing of not only the Hong Kong and Chinese people, but also Chinese soldiers and the People’s Liberation Army in Hong Kong,” Reuters news agency reported. “They can go into Hong Kong to provide support at any time.”

Monday’s violence followed a weekend of vigils and protests after a 22-year-old student protester died on Friday. Alex Chow had been in hospital since he fell from the ledge of a car park during a police operation a week ago.

The protests started in June against a now-withdrawn plan to allow extradition to mainland China, but have since morphed into wider demonstrations.

What happened to the injured protester?

The shooting occurred as protesters tried to block a junction at Sai Wan Ho on the north-east of Hong Kong Island. Police confirmed that one officer “discharged his service revolver” and that a man was shot.

Footage posted on Facebook showed the officer drawing his gun before grappling with a man at a roadblock. When another man approached wearing a face mask, the officer fired at him, hitting him in the torso. The officer fired twice more, but there were no injuries.

After the shooting, footage showed the 21-year old protester lying with his eyes wide open and with blood around him.

He has undergone surgery and remains in a critical condition, a Hospital Authority spokesman told the BBC.

The police said officers also drew firearms from their holsters in two other places. 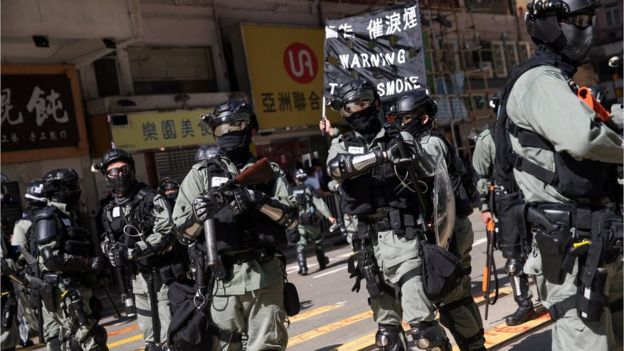 Police in Sai Wan Ho, after the shooting happened

But they denied what they called “totally false and malicious” reports that officers were ordered to “recklessly use their firearms” in Monday’s operations.

It was the third time a police officer had shot someone with live rounds. The first incident was during protests on 1 October when China was celebrating 70 years of communist rule. The second case was a teenage boy shot in the leg on 4 October.

The pedestrian crossing in Sai Wan Ho, where the young protester was shot, has become a site of considerable tension.

Activists have built barricades across the junction – and when riot police come they face a torrent of abuse from bystanders of all ages.

Blood can still be seen on the street – and next to it graffiti reading “we shall never surrender”.

Each time the riot police leave, the demonstrators return to erect their barricades again.

What happened to the pro-Beijing supporter?

The unnamed man was doused in a flammable liquid after getting into a dispute with protesters in Ma On Shan, about 20km (12 miles) north of the business district. It is unclear what started the argument, news agency AFP reported.

Video being shared online shows the man, who is wearing green, tell the protesters “none of you are Chinese”. The protesters respond by telling him to “go back to the Greater Bay Area”, which is a part of the Chinese mainland across the border from Hong Kong. 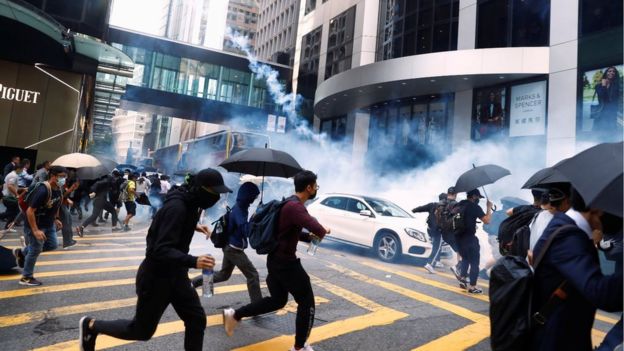 The man was then set alight in what Chief Supt John Tse said was the “most shocking incident”.

“The man is now admitted to hospital in critical condition and the case is under investigation by the regional crime unit of New Territories South,” he told reporters.

What else happened on Monday?

Most protests have taken place at weekends, but pro-democracy activists have called out all workers for a general strike on Monday.

Other incidents have included:

Police described the activists as “radical protesters”, conducting “extensive illegal acts” and urged them to stop any actions that threatened safety and obstructed the police.

Several universities have cancelled their classes for the day.

Why are there protests in Hong Kong?

Hong Kong is part of China but as a former British colony it has some autonomy and people have more rights.

The protests started in June against plans to allow extradition to the mainland – which many feared would undermine the city’s freedoms.

The bill was withdrawn in September but demonstrations continued and now call for full democracy and an inquiry into police behaviour.

Clashes between police and activists have become increasingly violent and in October the city banned all face masks.