Horrifying details of how 2 police officers were murdered in Zuarungu - MyJoyOnline.com

Horrifying details of how 2 police officers were murdered in Zuarungu 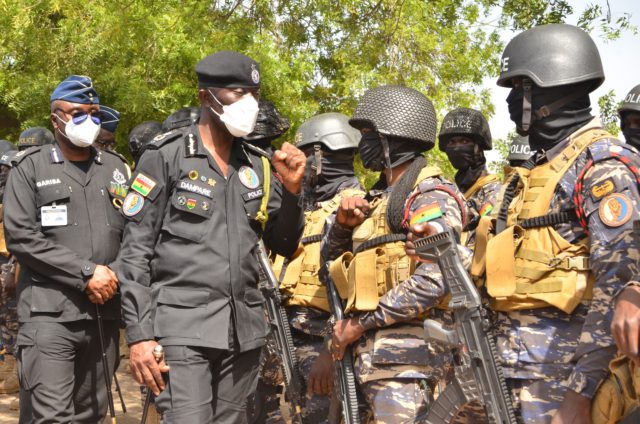 When two police officers of the Zuarungu police station, General Constable Emmanuel Akowuah and General Constable Adam Sulley reported for patrol duty on the night of Wednesday, December 15, 2021, little did they know that it would be their last ride together on earth.

What may have looked to them, like a normal night on duty, turned out to be bloody as they were gruesomely murdered by armed robbers who had held the owner of a daily provisions shop at gunpoint and demanded for his sales for the day.

Police had received distress calls that a robbery was taking place at the Zuarungu market square in the Bolgatanga East District of the Upper East region.

While a police team was being prepared at the Zuarungu Police station to move the scene, the two deceased officers who had earlier reported at the station for their regular patrol duties, arrived at the scene of the robbery. It is now believed they were oblivious of the robbery at the time of their arrival.

When Joy News arrived at Zuarungu market on Thursday afternoon, the shop that had been robbed did not open for business. And so did a few other shops close to it.

However, a mobile money vending shop about 50 meters away was open for business. Its owner, Ambrose Ayamga told joy news he witnessed the robbery.

According to Ayamga, he was just about closing for the day on the fateful Wednesday night, when a man walked into his shop and asked for his services.

“I told him I have closed for the day and switched off all my phones so I cannot serve anyone again”, Ayamga said.

According to Ayamga, the man was insisting on transacting business but he ignored him and went out of his shop to get his padlocks to come back and lock up his shop.

While returning with his padlocks, he noticed a huge man standing in front of the provisions shop in a suspicious manner.

Ayamga said he called some of his brothers to tell them he had seen a suspicious character in front of the shop which belongs to one, Baba Akolgo.

While talking to his brothers, he noticed the man standing in front of the shop was holding a gun and the man who had come to ask for Ayamga’s mobile money services was in the company of third man. These two then moved from Ayamga’s shop to join the man with the gun, in front of the other shop.

Ayamga will later discover that there were three other men inside the shop, executing the robbery while the other three outside were keeping watch.

How the 2 police officers were murdered

According to Ambrose Ayamga, when it became clear to him that the men were armed robbers, he was not sure what to do next. While trying to decipher his next move, the huge man fired his gun into the night sky and people in the market started running away.

Ayamga said he run to the back of his shop to find a hiding place, from where he realized that the robber had fired the gun to scare off the two officers who had arrived on their patrol motorcycle and were about to disembark from the bike, ostensibly to buy fried yam from a woman adjacent Ayamga’s shop and opposite the provisions shop that was being robbed.

General Constables Emmanuel Akowuah and Adam Sulley did not get the chance to draw their riffles when the robber fired sporadically in their direction. By this time, the market had been deserted by the traders and customers alike and Ayamga remained in his hideout.

The patrol motorbike was up in flames because its fuel tank was hit by the robber’s bullet and the officers were down inside the gutter on the edge of the road.

One of the officers, believed to be the rider of the patrol motorbike was lying under the burning bike; motionless and believed to be already dead. This officer has now been confirmed to be General Constable Adam Sulley whose body was later recovered; partially burnt.

The second officer suspected to have been the pillion rider had been hit by a bullet but was still alive and inside the gutter.

According Ayamga, he heard one of the robbers who was not armed, telling the others that the second officer was still alive and was crawling inside the gutter. The armed robber then moved closer and fired again at the officer to finish him off. This officer, it has become clear, was General Constable Emmanuel Akowuah.

Everything happened so fast and the robbers left the scene on 3 motorbikes, each bike with a rider and pillion rider, indicating that the robbery may have been carried out by six men.

The officers’ bodies were later retrieved from the crime scene, one of them partially burnt.

When Joy News visited the scene, signs of blood could be seen in the sand inside the gutter where the officers had fallen.

Burn signs were also visible with debris believed to be from the uniform of the officer who was burned by the flames from the exploded motorcycle. What looked like the remains of a burnt police boot was also sighted.

Baba Akolgo, the man whose provisions shop was robbed did not open for business on Thursday when Joy News visited the scene but he came back to the shop when we contacted him for an interview.

In front of his locked-up shop, a distraught Akolgo recounted that he was still inside the shop after 7pm on Wednesday when suddenly, 3 men rushed in and told him to hand over his sales.

According to him, they spoke in the Twi language saying; “Bring your money”.

Akolgo said the men were wielding a “big gun” so he complied without hesitation and handed over his sales. The robbers then asked if that was all the money he had with him and a scared Akolgo handed over a bag which contained some other money.

Akolgo did not know how much was taken from him in total because he had not yet accounted his sales before the robbers arrived but police quoted the stolen amount as 2000 Ghana Cedis.

Akolgo said he was not physically harmed and when the robbers were satisfied that they had taken all his money, they left the shop and fired some shots when they stepped outside.

Akolgo said he run further into the shop and lay near some stairs, scared for his life. After some minutes he could hear people calling his name.

“I heard people repeatedly saying; ‘but where is Baba’ but I was still scared to come out. When I finally came out, I realized they shot 2 police officers. Their bodies were lying down and burning in the flames”, Baba Akolgo said.

He took time to interact with the traders at the market, assuring them of their safety and police efforts to hunt down the criminals.

The IGP also met police officers at the Zuarungu station and the regional police headquarters in Bolgatanga to boost their morale and encourage them not to relent on their duties, following the murder of their colleagues.

A 50, 000 Ghana Cedis reward has also been announced for anyone who can give credible information that would lead to the arrest of the robbers.

Upper East Regional Police Public Relations Officer, ASP David Fianko-Okyere who briefed journalists after the IGP’s tour, corroborated the events that led to the killing of the two officers.

He said police were still investigating all leads in the case.