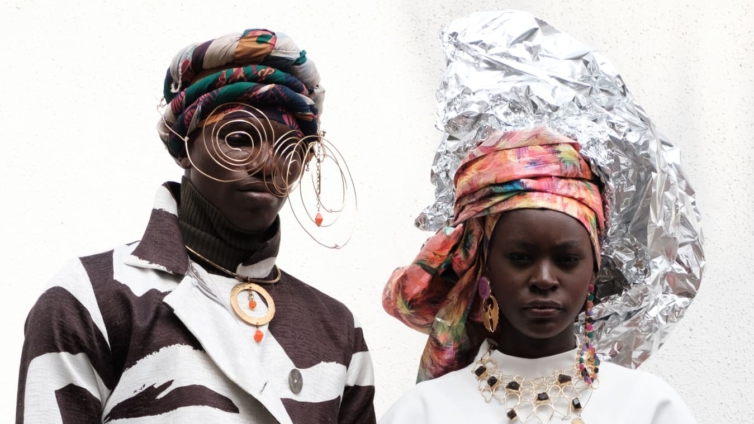 Daniel Obasi is a believer in the power of Instagram. The multi-talented creative — who has shot portraits for the New York Times and Billboard, and styled fashion editorials for Vogue Portugal and Dazed — has long used the platform as a way to connect with like-minded talents from the worlds of art and fashion.

Last year, it connected him with his most famous collaborator yet. “I got a DM from (Kwasi Fordjour), the creative director for Beyoncé, saying he would be interested in having me on this project that’s coming up,” Obasi recounted over the phone from Lagos. “Then he said, ‘Oh, it’s for Bey,’ and I was like, ‘I’m sorry, what?'”

The undisclosed Beyoncé project would turn out to be the “Black Is King” visual album, her critically reclaimed companion to last year’s “The Lion King” remake. Pitched by the singer as a celebration of “the breadth and beauty of Black ancestry,” the star-studded production features an eclectic mix of African performers and creatives, and those from the diaspora, both in front of the camera and behind the scenes.

At first, Obasi had assumed Fordjour wanted him to assist with the research process. Instead, he was enlisted to work with a team of Nigerian creatives to help style talent for the scenes set in Lagos. “We got on the phone literally the next day… Next thing I knew we were shooting and I was styling, and then the video came out,” he said. “Only when the credits came on was I like ‘OK, this really did happen.'”

Looking at the 25-year-old’s previous personal projects, “Black Is King” — an Afrofuturist vision of a world where Blackness is celebrated and African creators and their traditions are foregrounded — was a fitting commission. For the last three years, Obasi has used fashion, as well as photography and film, to similar ends.

In shorts like “An Alien In Town” and “Udara,” as well as photo series like “Lagos Futurism,” he combines the traditional, the contemporary and the imaginary to create a Nigeria freed from the political and social limitations of reality. Dark skin, afro hair and beautiful garments (often by local designers) abound, and the diversity of gender and sexuality is embraced.

A fixture of Lagos’ booming cultural scene, Obasi relished the opportunity to work with other Nigerian talents brought in to bring Beyoncé’s vision to life, including Afrobeats superstars Mr Eazi and Tiwa Savage (both of whom he shot for Billboard’s June 2020 issue), and designers Emmy Kasbit, Lanre Da Silva and Tola Adegbite of Turfah, who he’d collaborated with in the past.

“This project was just a bringing together of people who I love, people who I respect, people who are my friends, people whose work I’ve grown up with as an artist. It was just great to be like, “You too? Oh, wow! Oh my god. Yes!'” he said.

Speaking to CNN, Obasi shared his thoughts on community, fashion and the limitless possibilities of the imagination.

CNN Style: How do you see “Black As King” in relation to your existing work? There seem to be a lot of aesthetic and thematic similarities.

Daniel Obasi: Yeah, I guess you can say that because this is a very contemporary work talking about changing the African narrative. My work has always been about the fact that (African) stories are best told by Africans. We all have different experiences, but in all that diversity and under that difference, we still have things that connect all of us together, you know?

(For me) it presented this new possibility for us to actually all collaborate and create beautiful work from all our different junctions. It’s just always a matter of figuring out how to make that happen.

Some critics of the film have pushed back against this framing of cross-cultural exchange, suggesting that the lack of specificity that comes from borrowing and combining from different African cultures is problematic.

I wouldn’t say it’s cross-cultural in that sense because the creative direction came from their end. It was more about the fact that even a country like Nigeria is very diverse, and there are so many tribes within this country. On a normal day, a lot of these tribes probably wouldn’t be coexisting just because of the politics, because of everything that happened way before all of us. So “Black Is King” kind of brought all of us together.

When we were trying to do the “Keys To The Kingdom” part (when the prince marries his childhood sweetheart) it was very important to find a structure that spoke to Nigeria as a country. The location, the National Arts Theatre (in Lagos), does that really beautifully because it is one structure that we can all look at and say, “Oh my god, that is Nigeria.”

How do you define Afrofuturism in the context of your own practice?

For me, it’s an imaginative space where things are kind of limitless when it comes to what is possible. You can explore the past, the future, and your idea of the present in that space.

A lot of it has to do with the fact that, growing up, we (Nigerians) don’t really have a lot of references to futurism within our culture or within the stories that we’re told. Also, a lot of time, our history is either lost or tampered with, so even the past sometimes feels very blurry.

Afrofuturism gives you that space to define for yourself what your future is and what you believe in, so a lot of times it feels very personal. I like to look at instances within culture, within society, within politics, within the things that myself and the people I know experienced growing up, and create an alternative reality of my own. A lot of the work and stories we see today are very negative, or very conflicted, so Afrofuturism can be a healing space, a space you can just escape into and believe that things could get better.

When did you first realize the power of image-making and fashion as tools for world-building?

When I was younger, I used to be very much into very dreamlike stories that we grew up with, like (Nigerian children’s TV show) “Tales by Moonlight,” about animal kingdom where the animals could talk and other things that, on a normal day, would not be real; and stories and books like by writers that painted worlds that didn’t look like anything that you see when you step out of your house. The vividness and the specificity makes you understand the mind really is very powerful.

One of the things I love about fashion is the fact that it also works like that. You can come into this space and, inspired by the idea of a shape or form, use materials or clothes to create a style, a look or a feel that wasn’t there, and people will either connect with it or they won’t. It all boils down to how far you can think, or how well you can bring your imagination to life.

In your films and photography, you’ve often gone out of your way to elevate and find beauty in groups that have been marginalized historically. What political potential does this sort of image-making hold in your eyes?

So I think the powerful thing about imagery is that it speaks volumes, you don’t even need to say so much when it comes with a great, great image. I like to consider what we do subtle and quiet activism in its own right.

When we talk about beauty in this country — or even in the world — we have issues that, visually, have to do with the politics of both the skin and of gender. We work in an industry that is very materialistic and looks at image as a (reflection of one’s) point of view, so it’s very important for me to differentiate myself and use (my work) as a platform to say what I want to say.

I was talking about natural hair; I was very much (conscious of) not over re-touching the skin to show the beauty of what a black person’s skin looks like. When it comes to gender, I was always positioning women in positions of power, strength and beauty; and looking at masculinity, queerness and all these things society teaches you that you’re not allowed to be as male.

Those are things that we live through literally every day, so it was important for me to always find a way to bring that to the forefront of the work one way or another. We’re at this place where it is OK for everyone to talk about those things, but three years ago, it wasn’t really OK.

This year alone, you’ve worked on “Black Is King,” styled editorials for Dazed and The Face, and been profiled in i-D magazine. What are you hoping to achieve next?

I love making experimental films, so I think, for me, that’s the next thing I’m trying to work on, hopefully soon. As far as goals are concerned, I’m trying to solidify myself not just as a creative, but also as a business person. Other than that, I don’t know. Anything might just fly in from anywhere.

DISCLAIMER: The Views, Comments, Opinions, Contributions and Statements made by Readers and Contributors on this platform do not necessarily represent the views or policy of Multimedia Group Limited.
Tags:
Beyoncé
Daniel Obasi
Fashion