How Ghana spent this #YearOnTwitter 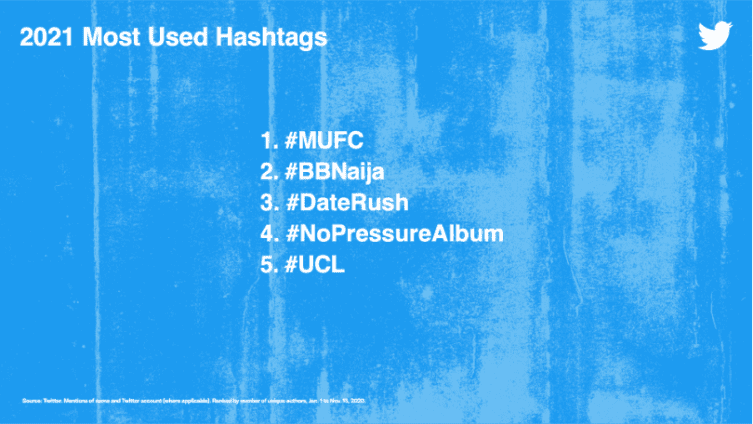 With 2021 coming to an end, Twitter has released its annual data highlighting some of the biggest moments & events that drove the most engaging and exciting conversations across the calendar year that happened #OnlyOnTwitter.

Ghana Twitter is the place where people come together to see what’s happening and discuss the most topical moments, conversations and movements taking place. As we draw closer to its end of the year, Twitter reflects on how Ghana spent its #YearOnTwitter and those #OnlyOnTwitter moments. What music and musicians made us dance?  What movies made us smile? Which sports heroes kept us hoping?

The most liked Tweets in Ghana

Tweets from Sarkodie & First Lady among the most liked this year

A simple greeting from Sarkodie to the people of Kumerica has taken the number one spot as the most liked tweet in 2021. His message read, “Good morning Kumerica”.

Rebecca Akufo Addo’s birthday wishes to her husband and President of Ghana was the second most liked Tweet posted back in March.

Manchester United’s Tweet to formally announce the signature and welcome Ronaldo came in third place in terms of Likes. However, the official announcement welcoming Cristiano Ronaldo back to Old Trafford is also the most retweeted Tweet of the year in Ghana.

On August 1, Black Sherif’s  Tweet about his 1st and 2nd sermon hit song took the fourth position, and Kinaata’s throwback photo of Castro and himself in a studio became the fifth most liked Tweet of 2021 in Ghana.

Interestingly, former Twitter CEO, Jack Dorsey’s post expressing gratitude to the President of Ghana and acknowledging Twitter’s decision to set up operations here in Ghana was the 7th most retweeted Tweet of the year.

Competition is certainly stiff, but these are the list of people who have made it to the top of the rankings. According to findings shared by Twitter from January 1 to November 15, Social media influencer and Pulse Twitter Influencer of the year, KalyJay was ranked first during the recorded period.

Sarkodie , Shatta Wale & Stonebwoy are among the musicians who made it to the top of the rankings. Elsewhere, media personality Nana Aba came through as the number one woman when it came to the biggest Ghanian Twitter handles.

Top Ten Music Tweets with the most likes

Here are 10 Tweets from Musicians with the Most Likes:

Popular Hashtags in Ghana in 2021

Born on Twitter in 2007, the hashtag celebrated its 14th anniversary earlier this year on

August, 23rd.  Hashtags provide a means through which people all over the world can share their voices and join global conversations in real-time.

As the annual Year On Twitter data shows, entertainment and sports are never far from the hearts of Ghanaians. This year, the people of Ghana took to Twitter more so than ever to express themselves and share their thoughts on what’s happening using a variety of the hashtags highlighted below. From #mufc to #BBNaija to #daterush to #nopressurealbum and #UCL, Twitter in Ghana was certainly abuzz with conversation and participation as these football, reality TV and music-related hashtags came out strongly as the most popular ones.

Twitter embodies the roar of a sports stadium no matter where you are and who you support. Football supporters will watch the match on TV but will never miss the conversation about their favourite team on Twitter. Their fandom and need to connect with fellow supporters makes Twitter the perfect place to stay up to speed with what’s happening with their favourite club.

Analysis of the data highlights that ChelseaFC, Manchester United & Arsenal are the three most followed football clubs in Ghana.

No- 1 Emoji used by Ghanaians

And when it comes to using Emojis, the Ghanaians seem to enjoy the lols and sharing their humour and laughs with everyone else. The “Face with Tears of Joy” 😂  was the most used emoji by Ghanaians in 2021, only on Twitter.

DISCLAIMER: The Views, Comments, Opinions, Contributions and Statements made by Readers and Contributors on this platform do not necessarily represent the views or policy of Multimedia Group Limited.
Tags:
Black Sherif
Twitter
Yaw Tog