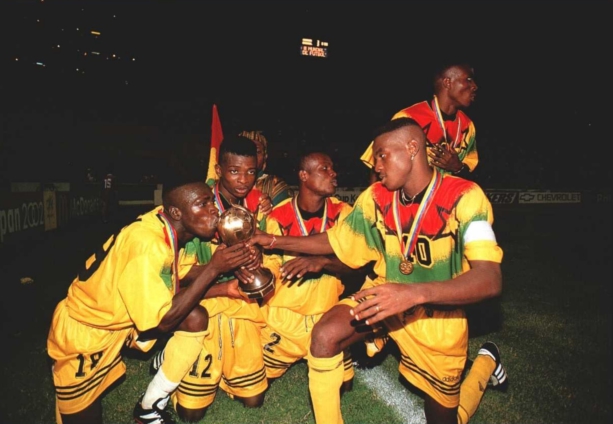 By the end of the 1995 FIFA U-17 World Championship, Ghana’s unequalled record of three final appearances and two wins had made them the team to beat in this age group.

The late coach Sam Arday’s side had the physical and technical edge over all the other sides in Ecuador.

Six straight wins tell their own story as even the mighty Brazil proved helpless in the face of the Black Starlets’ superior style.

The Black Starlets interchanged a 4-4-2, 5-3-2 and 3-4-3 formation at will, and with captain Emmanuel Bentil directing traffic in midfield, they had a leader who made sure they never let up.

Ghana rolled over Japan, Ecuador, the United States, Portugal, Oman and Brazil, before taking to the victory podium for a well-earned victory dance.

The tournament is also remembered for the introduction of two new rules: the Golden Goal and the use of time-outs. Ghana and fellow African representative Guinea were the only teams which did not utilize the time out.

With Brazil and Argentina making the semi-finals, South America could look back on the competition with some satisfaction – even if they were to lose out again to an African nation in Ghana. Oman shocked everyone by finishing fourth in their very first FIFA final tournament.

Cleverly coached by the wily George Smith, the team from the Gulf were a joy to behold, and in Mohamed Kathiri they had the tournament’s best player.

They only lost twice – to Argentina and future champions Ghana – and might have done even better had they not lost seven players to injury in the group phase.

The tournament also featured Argentines Esteban Cambiasso and Pablo Aimar, as well as Brazilians Julio César and Cléber. Ghana skipper Emmanuel Bentil and teammate Iddrisu Abu were also among the stand out players.

DISCLAIMER: The Views, Comments, Opinions, Contributions and Statements made by Readers and Contributors on this platform do not necessarily represent the views or policy of Multimedia Group Limited.
Tags:
Black Starlets
Ecuador
FIFA World Cup
Ghana